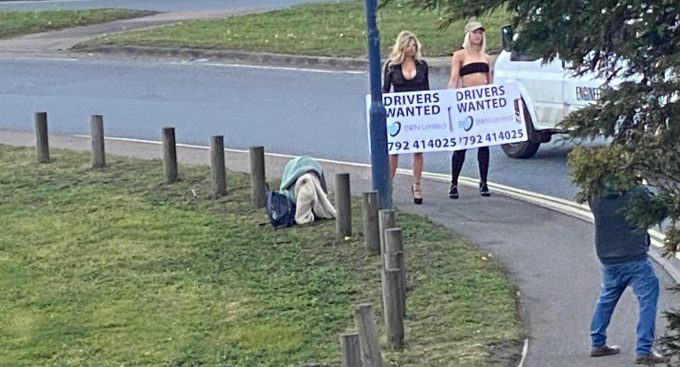 Driver recruitment agencies are “eating themselves” with practices that are eroding confidence in UK haulage, forcing a rethink among firms over hiring strategies.

Hauliers are accusing agencies of “just moving drivers around”, and say they are not expanding the pool of available drivers, creating an “artificial extension” of the shortage.

This is forcing haulage companies to pay drivers more, but the industry is losing faith in agency cover.

“This tactic is undeniably advantageous for them in the short term, and it is working, as we are seeing drivers lured away. They’re using tactics such as having scantily clad women parade around near port entrances offering drivers £900 a week – but long-term, it’s making us rethink,” one haulier told The Loadstar.

The owner of one firm said agency practices were also undermining cargo owners’ faith in the haulage sector, with the “driver merry-go-round” resulting in undelivered cargo.

One of the first to act has been haulier James Kemball, which implemented a new driver deal linking future pay and bonuses to company profit, with MD Kevin Williams hoping the move will reduce company reliance on agencies.

“We are confident this will enable us to secure more drivers, so we are not so dependent on agencies,” said Mr Williams.

According to him the industry needs to encourage newcomers by offering training in a bid to ensure there are enough drivers in the future.

He added: “There’s also a need to provide encouragement for the return of drivers from the continent, as their loss has had a large impact since Brexit. But, as we take back control of holiday and sickness cover, we’ll continue to consider drivers seeking part-time or flexible hours.”

Opinions among smaller firms remain mixed, with one arguing that the problems brought about by agencies “offering big money” was only impacting firms that had been underpaying drivers in the first place.

“We pay our drivers more than £900 a week, so where is the lure for them to up anchor and take on work offered by agencies?” asked one owner of a small haulier.

A driver/operator said the bigger role now played by agencies proved the point made by drivers in the UK, Europe and the US that there has been no commitment from “big employers” to driver welfare.

“If a driver won’t put up with long hours and poor conditions, an agency will find another who will,” he said, adding this was a situation intolerable for the industry.

“While we had a continuous supply of Eastern European drivers willing to do that, the status quo went unchecked, but now that has changed [because of Brexit], and the big companies have found themselves in a panic, and of course the agencies are taking full advantage,” he said.

Adding: “I can get £250 for an eight-hour shift, if I want and you can’t blame the agencies. The big guys are now on the wrong end of a situation they created by failing to value their workforce.”