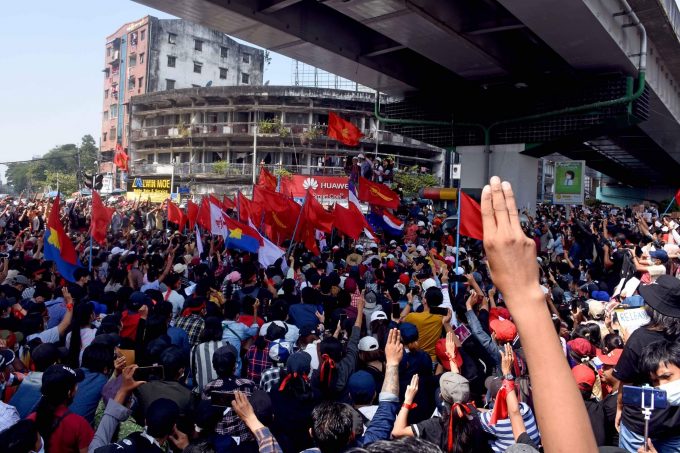 “The situation is critical,” Maersk Myanmar told customers, “the ongoing unrest is becoming a disaster,”

“Physical safety and mental health is compromised, not only for our people, but also for the people we are responsible for through our business.”

The Yangon-based office  has suspended all activities until 14 March, noting staff would not be working from home.

This week the military’s crackdown escalated, with forwarders telling The Loadstar of “shooting in the streets”, and according to local reports, the military has killed at least 50 protesters.

Rickard Ingvarsson, CEO Asia at Scan Global Logistics, said: “We, like many other firms, are working from home or with skeleton staff to keep employees safe.”

David Ramalingam, Scan’s country manager in Myanmar, added: “Most shipping lines are rejecting bookings and have not been able to provide space or equipment, suspending activities until Sunday, subject to the situation.

“MIP, the main port in the city, is congested and full, with import and export cargo on hold, since feeder vessel calls to Port Thilawa (MITT) are facing issues with customs, and trucking cargo to the port, which is away from the main city limits.

“And transport inside city limits is challenging for trucks picking up cargo from factories and moving it to warehouses and ports, due to road blocks.”

Yangon airport is operating with minimum staff and only ad hoc flights, added Mr Ramalingam, noting trucking to Bangkok remains an option for air and sea connections, despite space constraints there, too.

As pressure mounts on multinational firms operating in the country to condemn the coup, Swedish fashion retailer H&M announced yesterday it would pause new orders in Myanmar.

It said: “This is due to practical difficulties and an unpredictable situation limiting our ability to operate in the country, including challenges related to manufacturing and infrastructure, raw material imports and transport of finished goods.”