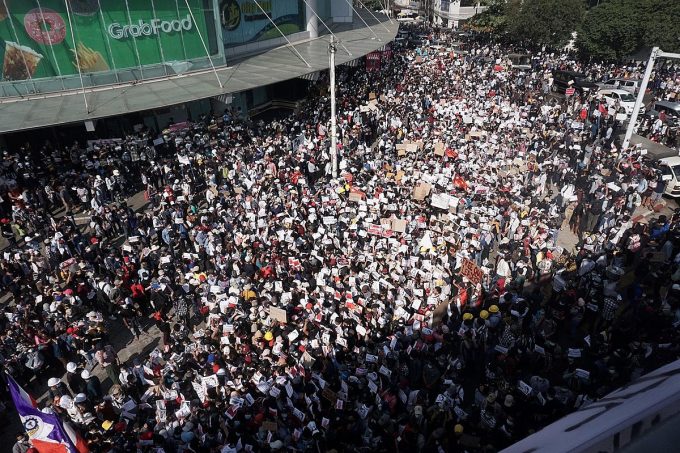 A nationwide general strike took place yesterday, with hundreds of thousands on the streets protesting against the military power-grab on 1 February.

“The situation is becoming more and more tense,” according to Hapag-Lloyd.

“Operationally, the terminals in Myanmar are close to full capacity, and feeder services, road transport is limited and a number of factories and depots are working with a skeleton labour force.

“With that, Hapag-Lloyd has taken the decision to temporarily suspend any import bookings into Myanmar with immediate effect.”

A spokeswoman for Maersk said the carrier was closely monitoring the situation, but was still accepting bookings.

“The operational situation in the ports continues to deteriorate, we also have limited trucking, warehousing services. Customs clearance is greatly impacted,” she added.

Bank closures have also had an impact on freight, for example, with CMA CGM announcing it had stopped freight payments in Myanmar temporarily, instead asking customers to settle payments overseas.

“Shipping lines have also stopped calling at the downtown MIP port and, until further notice, will only call at Thilawa (MITT),” he told The Loadstar.

A key factor in the freight disruption has been supply chain workers joining the protests, known locally as the CDM (civil disobedience movement). Mr Ramalingam said the port authority’s customs department was operating at half capacity, with workers forced to “enter the building by the back door,” since the front entrance is blocked by protesters.

“More agents are starting to operate again, but there’s still a lot doing CDM,” he added.

Warehouses, container freight stations and distribution centres have all been affected by CDM, he said, many closed and others operating with only 20%-50% of the normal manpower.

“Due to many factories still producing, especially in the garment sector, storage space is running out since exports are not working well, or not at all,” Mr Ramalingam noted.

Last week, the Myanmar Container Trucks Association joined the protests, adding to cargo delays at the downtown Yangon terminals, but Mr Ramalingam said not all trucks were off the roads.

“The largest trucking operators in the country aren’t doing CDM” he explained. “They truck to the port at around 4am, before anyone notices. Their rates are double and they are having a fantastic time getting all the work.”

Elsewhere, there are mixed reports regarding operations at Yangon Airport, although it seems most scheduled flights have been cancelled, with a limited number of charter flights reportedly landing.

Mr Ramalingam said there were still options for land-air and land-sea cargo via Bangkok, however, the Myawaddy border crossing is operating normally and there are no reported bottlenecks on the roads.

“Despite a 50% reduction of incoming cargo from Thailand, most warehouses in the free zone are full and it’s easy to get return loads to Yangon or other destinations,” he said.