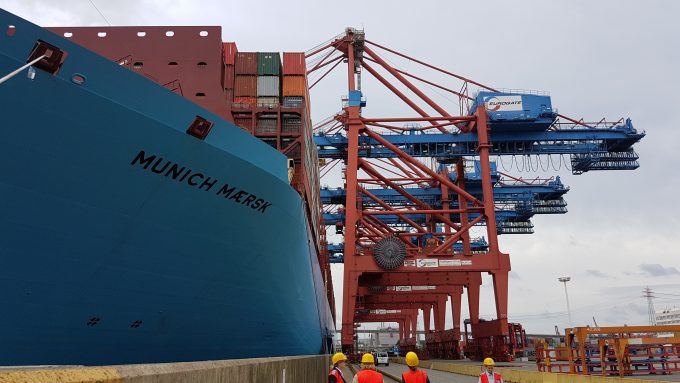 Maersk delivered a strong result across its shipping, logistics, services and terminals portfolio in the third quarter, despite a decline in top-line revenue.

He said: “The strong performance for the quarter, combined with our expectations for the rest of the year, led to the recent upgrade of our earnings expectations for 2019. We will continue our focus on profitability and free cash flow in Q4 and into 2020.”

However, the line said, a focus on capacity management and operational performance squeezed out costs, resulting in an overall 3% reduction in unit expenditure.

Mr Skou said the carrier was “well prepared for IMO 2020”; it would only have 10% of its 720-vessel fleet equipped with scrubbers, with the vast majority of its ships running on the more expensive low-sulphur fuel from 1 January.

In addition to a new BAF for contract from January, Maersk is introducing an environment fuel fee on spot volumes and short-term contracts, with effect from 1 December.

Mr Skou said there were no plans to order new ships and said he was unconcerned that some of Maersk’s rivals would be operating larger tonnage, adding that in conjunction with MSC, the 2M already had more ULCVs in service than the other alliances.

On the shock departure of chief operating officer and rising star Soren Toft this week, and the difficulties in finding a replacement of the same calibre, Mr Skou said Maersk “had a strong bench”.

“We will be spending a few weeks handling the situation, but I am 100% confident that we are not going to drop the ball and will find a solution soon,” he said.

Mr Skou declined to comment on strong rumours that Mr Toft will become chief executive of MSC, or if there was a non-compete clause or restrictive covenant in his employment contract.

It would be very unusual for a stock market-listed company to allow a key employee to join a rival organisation within 12 months of resigning and, if Mr Toft is heading to Geneva, he may need to spend some time in his garden before taking over at the helm.

Maersk’s logistics and services improved revenue by 2.6% to $1.6bn, “positively impacted by increasing revenue in intermodal and warehousing distribution” with gross profit jumping by 13% to $336m.

Meanwhile, terminals and towage reported a 5.8% increase in revenue to $986m in the third quarter, driven by an above-industry volume growth of 9.2% at APMT’s gateway terminals.

Mr Skou said that, while he was “satisfied” with the result, “we are still not where we need to be”, and “more steps will be needed” to reach the return on investment target.