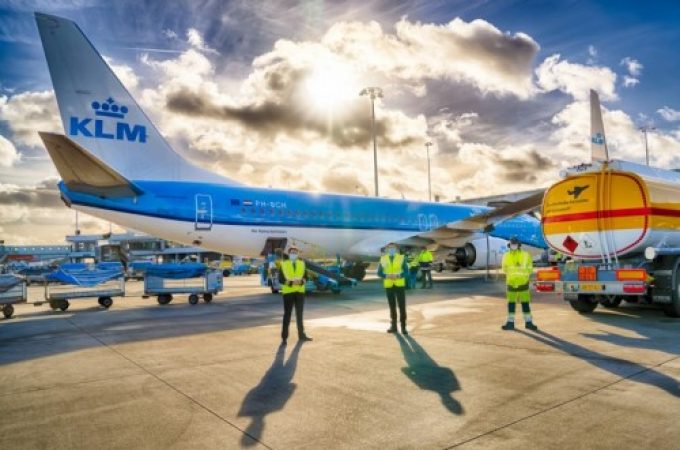 Pioneering forwarders and airlines are taking early steps on the long road to carbon-neutral airfreight.

With the start of the summer schedule on 28 March, DB Schenker will offer clients a CO2-neutral airfreight service, in collaboration with Lufthansa Cargo.

This will cover a weekly flight on the Frankfurt-Shanghai route with one of the airline’s 777-200 freighters.

The flight is powered by sustainable aviation fuel (SAF), made predominantly from biomass like recyclable vegetable and cooking oils. SAF can also be added to conventional kerosene as a ‘drop-in fuel’ without the need to adjust the aircraft or the fuel supply chain.

DB Schenker chief executive Jochen Thewes announced the plan for the service at the end of November, two days before the pair conducted a ground-breaking trial flight on the SAF-designated route.

According to a spokesperson for DB Schenker, feedback from the industry, as well as public and political observers, indicates enthusiasm to move the needle on CO2-neutral air cargo.

“Even before the start of our regular weekly SAF-fuelled cargo flights between Frankfurt and Shanghai, we are seeing strong interest from customers for this route and also for other destinations,” he reported.

OEMs in the automotive industry have shown readiness to contribute to a greener air cargo sector, he added, adding that “very positive feedback” was coming from luxury consumer brands and the pharma industry.

Siemens Healthineers, a division of German industrial giant Siemens, was one of the shippers that moved freight on the pilot flight to Shanghai in November.

“This is an important step towards sustainable transport routes,” said Frank Debus, head of customer services managed logistics, at the time.

Meanwhile, on the North Atlantic, Air France-KLM-Martinair Cargo and Bolloré Logistics are blazing a trail. The French logistics firm joined the airline’s SAF programme, which entices forwarders and shippers to power a percentage of their flights with SAF, with their payment going towards the sourcing of SAF.

The collaboration began last month on the route between Paris and New York JFK. This will cut CO2 emissions of the logistics firm’s shipments in the tradelane by at least 50%. Bolloré has set itself a target to reduce the CO2 emissions linked to its transport services by 30% by 2030.

Both the AF-KL-MP-Bolloré partnership and DB Schenker-Lufthansa are looking to expand their collaboration to other routes, and the two airlines are eager to bring more forwarders onboard. At the moment, though, no decisions have been taken about new routes, the DB Schenker spokesperson said.

“The pace at which we can expand this offer will also depend on the sustained availability of SAF,” he added. At this point, there is not enough SAF for a broad push to advance emissions-free airfreight.

He said: “We need a joint effort and the support of policymakers across the globe to send a clear signal to the fuel producers – we need more fuels from renewables, we need more sustainable aviation fuel.”

And increased output of SAF would also help bring down its cost. Currently, the price differential between SAF and conventional kerosene is substantial and will remain so for years to come, according to the DB Schenker spokesperson.

But for their part, shippers seem not to be put off by the combination of a premium on SAF and high airfreight rates, a remarkable change from the customary haggling over cents.

“In theory, high rates reduce the significance of surcharges for SAF as a share of the total price. In reality, we are observing a strong interest in this product regardless of current developments on the spot market,” the DB Schenker spokesperson said.