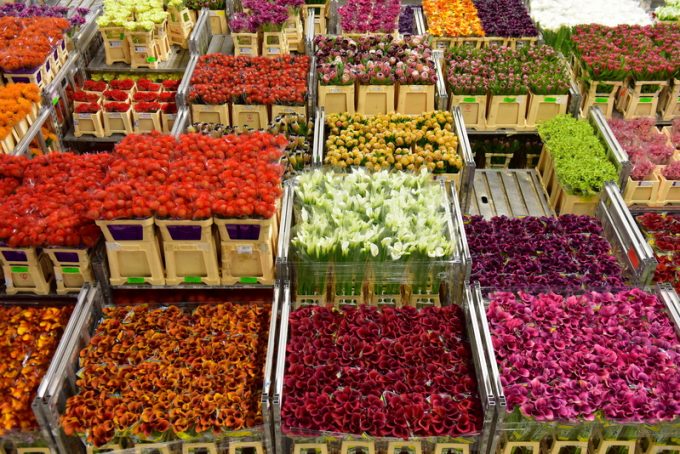 The Holland Flower Alliance is leading the way in new directions – with an approach that embraces all stakeholders.

Flower logistics are not standing still. The Royal Flora Holland Aalsmeer Flower Auction and Amsterdam Airport Schiphol have been long-standing and prominent fixtures of the flower universe – the former being the world’s largest and most famous flower auction, and the airport as the gateway connecting Aalsmeer to origins and markets around the world.

But both organisations know that today’s bloom wilts if it is not nourished with new initiatives to bring forth green shoots. Together with KLM Cargo they formed the Holland Flower Alliance (HFA) back in 2016.

While one of its objectives is to cement and expand the participants’ role in flower logistics, there is a broader aim to refine the flower supply chain altogether, creating benefits for all stakeholders. To that end, the HFA has been working with academic institutions and government bodies as well as operators at all stages of the chain.

The drive has produced some significant improvements so far. Having identified a plethora of different types of boxes (literally more than 100 different types are currently in use) as one of the more glaring inefficiencies in the flower supply chain, the HFA set out to design a standard flower box. After extensive trials the prototype was unveiled last November. Compared with other packaging types, the new packaging concept allows operators to put up to 15% more weight on a pallet, a considerable gain in efficiency.

An additional effect of the initiative has been that growers have begun to place the boxes on skids, noted Eline van den Berg, the HFA’s programme manager. She reckons that this will herald the start of a major shift to skidding flower shipments, producing additional efficiencies.

Ms van den Berg has flowers in her DNA, coming from a family that has grown them for generations. Her career in the industry includes a long stint on the logistics side before joining Royal FloraHolland, which runs the Aalsmeer auction.

Another major drive of the HFA is the development of a digital platform to improve visibility and the flow of shipment data between all parts of the flower supply chain. The goal is to have all members on board by the end of 2020.

While this marks another significant advance, more remains to be done. “The step to digitisation is still a very big step. That will be a big challenge,” remarked Roos Bakker, director of business development of Schiphol. She worked in Schiphol Group in various roles for 12 years before her move to the cargo team as director of business development.

She and Ms van den Berg have been working closely together. “We speak several times a week,” Ms van den Berg said. This is on top of the HFA’s fortnightly meetings to update each other on the progress of initiatives and relevant developments and issues.

Both of them relish the dynamic character and complexity of the flower supply chain and the diversity of the shareholders along it.

“The flowers are very important for Schiphol and for the Netherlands. I am proud to be able to contribute to this success,” Ms Bakker added.

While the number of women in the industry has been on the increase, it still remains a man’s world and stands to benefit from more involvement of women. This is not so much about a balanced gender ratio as for a broader, more balanced perspective, said Ms van den Berg. A more inclusive, diverse basis can create a stronger alliance, she remarked.

Women can be catalysts for better collaboration. “To do business there must be trust. I think women can play an important role in this,” remarked Ms Bakker. They can help bring people together to act in harmony. “In Dutch we call it the ‘Haarlemmer Oil’,” she said.

“Everything must be in balance, and co-operation with all partners in the chain is very important in this,’ she stressed.

The human aspect remains critical, the advance of technology notwithstanding. The latter can only help the industry move forward if there are shared goals and collaboration, Ms van den Berg commented.

“There has to be an emphasis on the human factor and a good relationship with partners, creating trust,” she said.

Ms Bakker noted that digitisation is a hot topic with great potential, “but if we want to keep cargo, we must also continue to pay attention to the airport’s customers,” she warned. “We have to be careful that the customers do not become a neglected child.”

While efforts on digitisation continue, the HFA is also working on a number of other critical issues. High on the agenda is sustainability, although this extends beyond flower logistics to other areas of aviation and logistics, Ms van den Berg pointed out. “Meaningful solutions can only be achieved by working together and sharing initiatives,” she emphasised.

“The HFA is very focused on sustainability. It plays an important role in all initiatives from the HFA and we, together with KLM and Royal FloraHolland, do everything we can to deal with this consciously,” commented Ms Bakker.

This article was sponsored by Amsterdam Airport Schiphol.