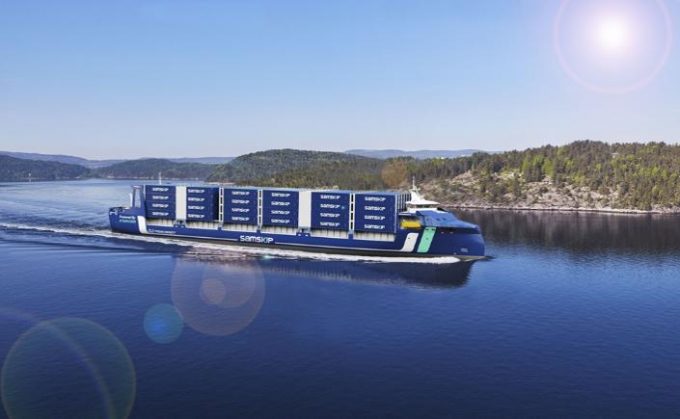 The vessels will operate autonomously between Oslo Fjord and Rotterdam, said the carrier.

Are Gråthen, CEO, Samskip Norway, added: “Together, Samskip and Ocean Infinity will also accelerate plans to advance autonomous ship technologies and remote operation of ships and cargo handling equipment. These ships are the first part of an exciting collaboration.”

Samskip said the vessels would use diesel-electric as a back-up, which will require them to carry diesel gensets, tanks and fuel systems, a large insulated hydrogen tank and fuel cell system.

Though they will suffer in terms of cargo capacity, thanks to the vast space required by a tank of hydrogen fuel, using fuel cells will mitigate some of the inconvenience. In contrast to internal combustion, where new efficiency improvements are now almost unheard of, fuel cell technology has not yet reached its full potential.

The highest efficiencies for fuel cells today are around 60%, but they could theoretically double the efficiency of internal combustion engines, because they do not require conversion of fuel into heat to generate power.

Fuel cells in the maritime sphere are not entirely without precedent: in 2009, Eidesvik Offshore operated a 330kW fuel cell with LNG on its offshore support vessel, Viking Lady.

There are indications that the future will not be plain sailing for hydrogen. The fuel is used as a precursor to e-ammonia and e-methanol, which means it will be in massive demand.

Working in conjunction with the International Chamber of Shipping, Prof Stefan Ulreich, of Germany’s University of Applied Sciences in Biberach, recently published a study suggesting that some 3,000TWh of renewable energy would be needed to fully decarbonise shipping – as much as the entire capacity existing today.

He told The Loadstar: “We have rather interesting plans to use electricity for heating and for public and private transport… we will still have to replace coal and gas, the lion’s share of energy production in Europe, which is already a challenging task. Hence, there will not be much energy left for hydrogen production, in my opinion.”

Producing green hydrogen is not only limited by renewable energy capacity, but also electrolyser capacity.

Yesterday, Siemens Energy and Air Liquide announced a partnership in a new factory in Berlin to generate some 3GW of electrolysers a year. BloombergNEF 2024 predicts global electrolyser production capacity will reach 37GW annually by 2024. However, this will still fall well short of the annual 3,000TWh needing to be added by 2050 to decarbonise shipping.

Instead, Dr Ulreich predicts that most will come in the form of blue hydrogen, generated using fossil fuels with carbon capture.

“In the end, I think we cannot avoid [carbon capture], because the problem is too big to solve with just renewables, unfortunately,” he said.