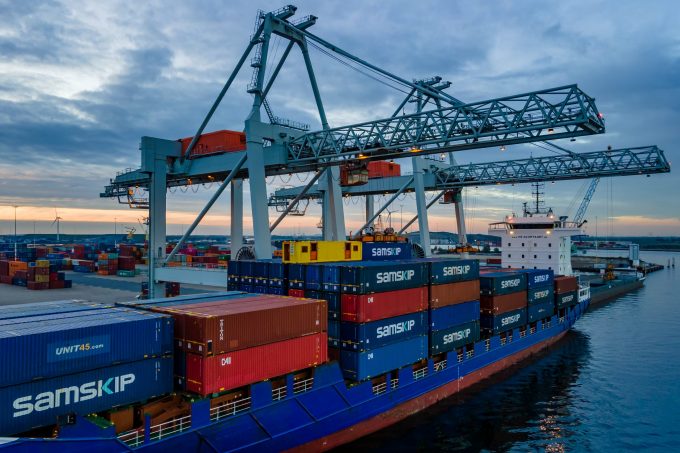 The TMA terminal in Amsterdam
By Charlie Bartlett, Technical Editor
28/10/2022

Samskip and biofuel vendor GoodFuels say they have proved it is possible to reduce a ship’s CO2 emissions by more than 90%, raising the possibility of shippers almost entirely decarbonising their sea cargo.

Goodfuels has negotiated a way around the maritime industry’s usual shipowner-charterer deadlock by approaching shippers directly. This allows its customers to purchase biofuel which can be blended into the ship’s bunkers, negating the CO2 cost of their shipment.

But a vessel running on 100% biofuel was not thought possible until recently.

Samskip, having run its vessels Samskip Innovator and Samskip Endeavour successfully on 100% biofuel, has added Samskip Hoffell and Samskip Skatafell.

Biofuel, when burned, creates CO2 emissions from the funnel that are comparable with those of fossil fuels. However, given that residual biofuels are manufactured entirely from waste fatty oils, such as used cooking oils, they can claim to replace fossil fuels in an engine, meaning that a tank full of fossil fuel, and its associated emissions, are left in the ground. Burning GoodFuels residual biofuel has already allowed the vessels to exceed IMO 2030 and 2050 targets without complex retrofits.

For Samskip, though, a 90% reduction does not appear to be enough, and the company is investigating the use of Value Maritime ‘Filtree’ carbon capture devices, which promise a further 30% CO2 emissions reduction. Offsetting fossil fuel use by 100%, and then capturing the tank-to-wake CO2 emissions from burning biofuel, could result in a carbon-negative ship operation.

An issue for biofuel, however – which takes the form of sustainable aviation fuel (SAF), bio-diesel for cars and trucks, and other compositions – is provenance, as crop biofuels, such as those grown in the US and Germany are deemed to be environmentally damaging. While the CO2 emissions from burning palm oil biofuels, which are associated with deforestation, are worse than fossil fuels.

GoodFuels has previously told The Loadstar it would not even refine its fuels from used palm oils, because it would introduce too much uncertainty.

“At the moment we don’t use any palm oil nor palm oil-derived residues, because we do not believe that industry is reliable enough to source from,” said Bart Hellings, COO of GoodFuels, in February.

“To guarantee to our clients that the fuels we provide are waste- and residue-based only, we work with ISCC, a globally applicable sustainability certification system that certifies the sustainability of all our feedstocks,” said GoodFuels Johannes Schürmann, head of supply and operations, today.

GoodFuels yesterday announced it had developed an isotopic tracer, which detects dilution in the fuel. The plan is to introduce this to all of its fuel, to be able to demonstrate to end users that the fuel has not been tampered with.

Mr Schürmann said: “While the isotopic tracer is not designed to detect palm oil specifically, it works to detect contamination, regardless of the contaminant. In other words, the tracer will be able to detect a substance that is not supposed to be there, but it wouldn’t identify what the substance is specifically.”