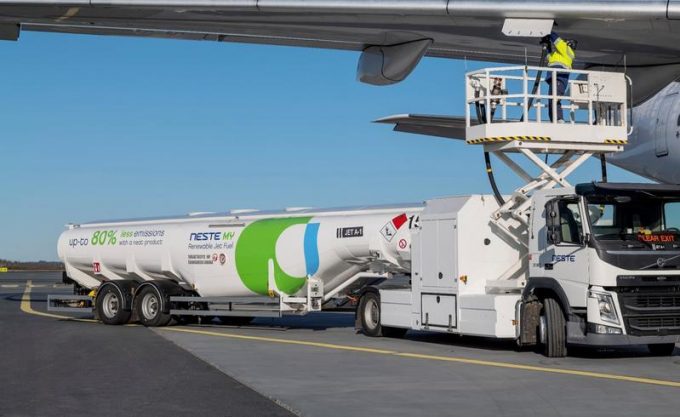 Global adoption of sustainable aviation fuel (SAF) will soon get a boost in “typical[ly] lagging” Asia, as Finland’s Neste plans to produce its first batch in Singapore.

Having suffered delays due to the pandemic, the facility is now scheduled to come onstream in the first quarter of 2023, with plans to expand to an annual capacity of 1m tonnes.

Neste EVP for renewable aviation Thorsten Lange told Reuters Asia may be lagging behind for the time being, “but that could massively change within the next two to three years. Having a mandate in place provides demand certainty”.

There are various options emerging for transport fuels, including electro-fuels ammonia and methanol. But the low energy content of most alternative fuels is a major challenge for airlines in particular, which require a high specific energy content and long intervals between refuels.

However, a challenge for all biofuel manufacturers, but particularly for Neste operating in Singapore, is in ensuring that only waste streams are used as a feedstock. Malaysia is the second-largest palm oil producer, with 26% of global production as of 2019. Indonesia, meanwhile, is the largest by far, with 58%.

Palm leaf plantations are driving major deforestation campaigns in these countries and it is thanks to this that green NGO Transport & Environment has estimated that the CO2 footprint of palm oil is three times that of conventional fossil diesel.

In a 2018 Q&A, Neste Oil SVP sustainability and public affairs Simo Honkanen said “all palm oil we source is supplied by carefully selected responsible producers in Malaysia and Indonesia… we source certified palm oil directly from producer companies for whom we have strict sustainability criteria. Nearly 80% of the production of our renewable products is based on waste and residues, the rest is produced from sustainably produced vegetable oils, mainly palm oil.” The Loadstar has contacted Neste for further clarification.

Bart Hellings, COO of Goodfuels, a manufacturer of residual biofuels serving the maritime and land transport industries, told The Loadstar his company side-stepped palm oil entirely for the avoidance of doubt as to its origin.

“I’m not saying sustainable palm oil does not exist… [and] I would stress that palm oil is still the most efficient way to make a vegetable oil. But then again you could question whether that should be used for a fuel application.”

The introduction of virgin palm oil into biofuel feedstocks was something that “most likely will still happen,” Mr. Hellings said. But for Goodfuels’ part, “At the moment we exist in a fully palm-free direction, so we don’t use any palm oil nor palm oil derived residues, because we do not believe that industry is reliable enough to source from. So, if you had a waste stream of palm oil, we would also not use it in our biofuels.”

Goodfuels believes that “on a feedstock level,” there are sufficient residual wastes from industrial processes to power over 50% of the global [ship] fleet”, but that major steps would be required to commercialise the fuel sufficiently to meet this target.

Neste’s Singapore plant will produce renewable fuels from waste cooking oils and animal fats and, Mr. Lange said, the available feedstock would be “enough to cover requirements at an initial stage”, but would not be enough by itself in the long run.

The debate within the maritime sector over the stimulation to shift from fossil to low-carbon ...

Carriers want a global decarbonisation system rather than regional regulations from jurisdictions in Asia, Europe ...