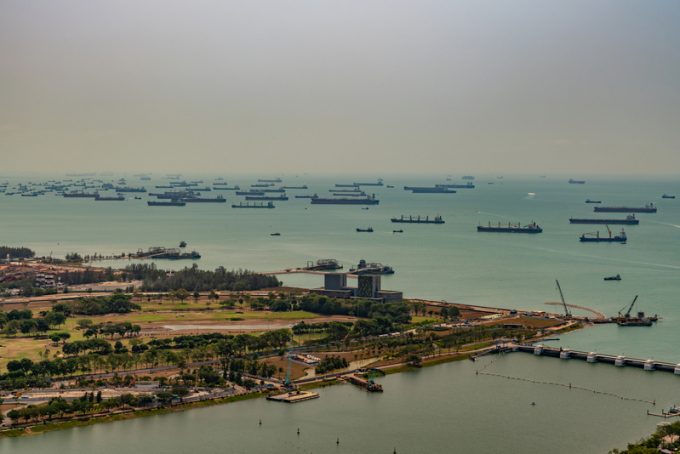 Although the 1 January switch to maximum 0.5% low-sulphur fuel for shipping appears to have passed without major disruption, liner consultancy Alphaliner has reported instances of idle containerships waiting for compliant fuel.

It said the carrier most affected was Singapore-based Pacific International Lines (PIL), which apparently has had at least six vessels anchored off of its home port since late last month, awaiting bunker supplies – all panamax ships deployed on Asia-West Africa tradelanes.

As the main bunkering hub in Asia, Singapore has seen high demand for LSFO push the price for the compliant fuel to over $700 per ton, from around $550 at the beginning of December.

Intra-Asia carriers will be particularly badly hit by this massive hike, given that HFO (heavy fuel oil) industry bunkers were available at below $300 per ton. Indeed, even regional carriers that have been able to secure low-sulphur fuel surcharges from customers will now find them inadequate to cover their additional operating costs.

And given already slim margins for intra-Asia carriers, some operators could be forced to rationalise networks and cull services in the coming weeks.

Meanwhile, Europe’s main bunker hub of Rotterdam is showing a wide disparity with Singapore, with LSFO currently at $580 per ton.

However, several of the larger vessels bunkering at Rotterdam have exhaust gas cleaning scrubbers installed and are therefore able to continue to bunker with HFO, only taking on limited LSFO for ports where the use of scrubbers is banned.

“It has gone quite seamlessly really,” one carrier source told The Loadstar this week. “It looks like all the planning and forward ordering has paid off and I haven’t heard of one of our ships suffering any delays since 1 January.

“A number of our vessels have scrubbers fitted and there are several more coming out of the yards in the next few weeks, so if the spread remains the same we will have a significant unit cost advantage over some of our anti-scrubber competitors,” he added.

Notwithstanding the number of vessels carriers operate that are fitted with scrubbers, several container lines are looking to hike their low-sulphur surcharges for spot and short-term contract business. CMA CGM announced last week it was increasing its LSS20 (low-sulphur surcharge) on 1 February.

The French carrier, which operates a number of scrubber-fitted vessels and is currently taking delivery of LNG-powered ULCVs, said it had reset its LSS20 at $275 per ton, following the $200 per ton value set on 1 December.

To calculate the amount to be paid by shippers, the surcharge is multiplied by a trade coefficient representing the fuel consumption per container.