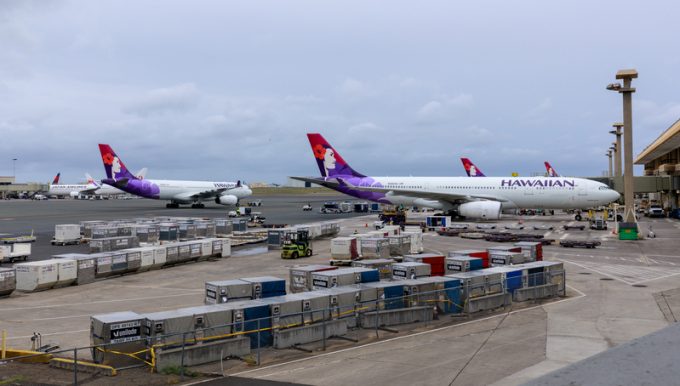 Hawaiian Airlines has a freighter poised to join its fleet, as well as a newer passenger widebody type, with more capacity scheduled to commence next March.

But with just 8% of its passenger flight schedule currently in operation, neither arrival is eagerly awaited.

The carrier’s home state is slowly emerging from its Covid-19 lockdown. Stores began to open over the past two weeks and a 14-day quarantine for inter-island travel is due to be lifted on 16 June.

However, the 14-day quarantine for arrivals from outside Hawaii remains at least until 31 July, so many stores and most hotels will remain closed, said Brad Matheny, Hawaiian’s MD cargo.

The airline’s passenger flights are down to five daily flights between Honolulu and the other major airports in the state. International flights have been suspended, and scheduled connections to the US mainland have been slashed to three a day for essential travel, going to Los Angeles, San Francisco and Seattle.

“These flights are funded primarily through cargo and we’re able to run them on a slight profit margin,” Mr Matheny said.

Hawaiian has shifted a lot of its mainland routes to A321 equipment, but on the current flights it uses A330s.

“The A321 is more efficient on the passenger side, but cargo is the big piece,” Mr Matheny explained, adding that the crew rest module on the lower deck has been removed on these A330s to optimise cargo capacity.

Hawaiian’s A330 cargo flights outside Hawaii began with services between Incheon and Honolulu, and after initial flights offering a cargo connection between Taipei and San Francisco a couple of weeks ago, it is now moving to turn this into a more consistent service. It is also starting a twice-weekly Tokyo-Los Angeles service this week.

The flights so far have been very successful, according to Mr Matheny. Out of Asia, electronics, PPE, auto and machine parts have made up most of loads, while westbound, Hawaiian has taken advantage of the cherry season in California and will do likewise out of the Pacific north-west in the coming weeks.

However, so far the airline has refrained from putting cargo on seats or taking out seats.

“We’re continuing to evaluate these scenarios. It depends on how quickly restrictions are lifted and business bounces back,” Mr Matheny said.

Now a fourth ATR-72 is waiting in the wings. It was brought from Europe to the US mainland for certification just prior to the lockdown and has been sitting there since.

And Mr Matheny is not in a hurry to bring it over to Hawaii. While intra-state shipments remain fairly strong, the international feed – much of it supplies to resorts and hotels – is down, which has reduced the opportunities to fill up the freighters.

The ATR-72 takes up to seven LD-3 containers – the same ULD type used on the airline’s transpacific routes.

The plan is for the fourth freighter to serve as back-up when the other ATR-72s go for heavy maintenance next year ,before being deployed for charter and other work.

Siomilarly, Hawaiian is not in a rush to get the first of ten 787-9s, scheduled for delivery next March.

“Expanding the fleet and adding new aircraft wouldn’t be in our best interest now. We’re in discussions with Boeing about the delivery dates,” Mr Matheny said.

“We’re dedicated to that aircraft. That is our longhaul aircraft of the future. It’s just timing-wise,” he added. Hawaiian also has options on an additional ten 787-9s.

Repercussions from the pandemic have also put the brakes on other projects. Hawaiian Cargo was planning to beef up its electronic processing capabilities to mobility platforms and better remote access to its IT platform, as well as implement a warehouse scanning system. The latter was ushered in before the outbreak and has brought efficiencies, but the other projects are on hold as management is trying to reduce the airline’s cash burn from $4.5m a day to $3m, and some of the savings come out of the cargo budget.

Another major initiative has been slowed but not halted. ULD provider Unilode is in the process of installing bluetooth tags on all of the carrier’s ULDs, while the airline is setting up readers in its stations and key customers’ locations.

“This continues, although not quite at the pace of pre-Covid,” Mr Matheny said. He reckons this will be completed some time in early 2021.

He will have his hands full with cargo flights for a while, as the division is bringing in most of Hawaiian’s revenues.