The Air France-KLM-Martinair airline group have signalled a long-term commitment to freight.

The freighter fleet of Air France-KLM is poised for a rebound with the order for four A350Fs and options on another four, as reported in The Loadstar yesterday.

Pre-pandemic its all-cargo fleet had shrunk considerably, prompting speculation that AF-KLM had dialled down its cargo focus, further fuelled by caps on slots for freighter operations at Amsterdam Schiphol in 2017.

Adriaan den Heijer (below), EVP Air France-KLM Cargo and MD of Martinair, said the past couple of years had been a unique period, but management was bullish on the long-term prospects for sustainable growth in the air cargo market.

“What we’re adding here is a show of recognition of our strategy towards the cargo market, towards cargo in our portfolio, right-sizing and optimising our model,” he told The Loadstar. 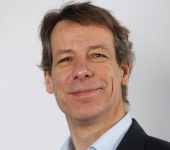 “We have a number of strategic pillars,” he continued, pointing to sustainability and the drive towards digitalisation.

“This is, I would say, the third pillar, where we constantly look towards our optimal footprint in the market; where we think we can best serve our customers and where we can play a relevant role.”

He stressed that the order for new freighters did not constitute a significant change of strategy. Compared with many other carriers that employ a hybrid cargo strategy of using both bellyhold and freighter capacity, the share of freighters at AF-KLM is relatively limited, at about 15%.

Recent trends in the industry, such as forwarders’ use of dedicated capacity and the rise of e-commerce, are not prompting a change in the model towards dedicated flying for individual customers, other than ad hoc charters around the fringes of the freighter schedule.

“Our stronghold, and really our competence, is running a scheduled full freighter and belly capacity airline,” Mr den Heijer said. “We are operating charter operations here and there, when they fit into the schedule.”

And the addition of more freighters is not intended to make up for an anticipated lack of belly capacity, he added.

Passenger widebodies have been slow to return to service, especially to longhaul routes, and many carriers have disposed of older aircraft. Moreover, on some sectors, airlines are fielding A321neos or 737MAXs where they previously used widebodies.

The AF-KLM fleet is not far from pre-Covid strength, though. It now serves 111 widebody destinations, compared with 120 pre-Covid, and operates 950 weekly frequencies, down from 1,100 during the peak summer season of 2019.

The new aircraft will be stationed in Paris as part of the Air France fleet. But this does not herald a shift in focus to the French hub, according to Mr den Heijer.

“At this moment we have four freighter aircraft in Amsterdam and only two in Paris,” he said, adding that the French presence today constituted a relatively small footprint with commercial and operational limitations.

“In the next period, we will surely go through the same exercise for Schiphol.”

With two B777 freighters in its line-up, an order for more would have seemed more likely than the choice of the A350F, for which AF-KLM is one of the launch customers. The A350 offers a larger payload and volume, as well as an improvement in efficiency, but sustainability was another criterion in the selection, said Mr den Heijer, adding that AF-KLM had seen “good experiences” with the belly capacity of the A350.

At this point, he said, there was no decision on what will happen with the two 777-200Fs and the 747Fs in the fleet, in the long run. That decision would be made closer to the time when the first A350 is ready to join the operation.