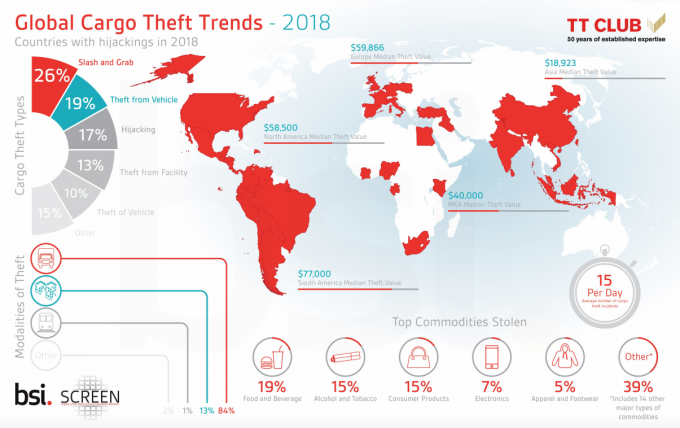 Thefts from trucks remain the biggest criminal risk in logistics, accounting for 84% of cargo theft.

But along with the problem of unsecured parking, the TT Club reports a rising trend of thefts by ‘insiders’.

TT Club, in partnership with BSI Supply Chain Services & Solutions, yesterday released a report on global cargo theft, that says ‘slash and grab’ is the most common type, accounting for 27%, with 29% of the crimes happening in transit.

Theft from warehouses and facilities are less common, with thieves seeming to shy away from secure locations.

Regionally, however, the results differ – with the highest median value of thefts in South America, at $77,000.

In Europe (see chart below), ‘slash and grab’ accounted for half of all thefts, which, the report notes, was primarily due to the large number of curtain-siders used in Europe. The UK accounted for 86% of all cargo thefts, with Germany next – at just 4%. Alcohol and tobacco were the most stolen items, at 21%.

While hijacking is relatively uncommon, Italy is the most likely country for it to happen. 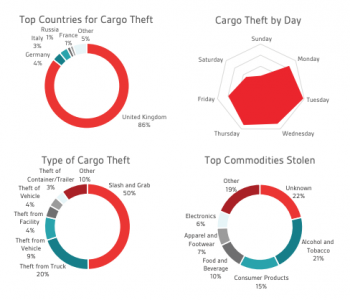 North America saw most cargo crime in Mexico (68%), followed by the US (23%). The most striking variance was between Canada and the US, and Mexico and Central America, the latter characterised by aggressive and often violent hijackings.

In contrast, “thieves in the United States and Canada most frequently steal unattended cargo trucks parked at unsecure locations, including truck stops and gas stations. Hijackings in these two countries are extremely rare,” notes the report. 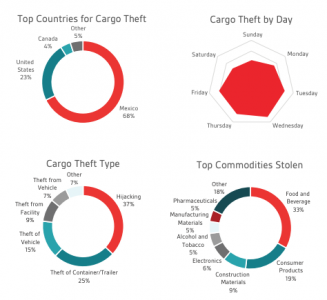 Food and beverages (33%) was the most highly prized commodity, while consumer goods were stolen 19% of the time. Pharmaceuticals were stolen in “highly targeted” thefts focused on warehouses and delivery sites, as well as in-transit trucks. While the UK accounted for most pharma thefts, at 29%, the US was second with 18% and Mexico accounted for 12%,

In Asia, India (59%) and China (24%) were the two countries where thefts were most frequently reported – but the median value of the thefts was just shy of $19,000, against just under $60,000 for Europe and North America. But while trucks thefts were common in North America and Europe, in Asia thefts from facilities accounted for the most crime, at 43%, while 19% of thefts came from hijacks. 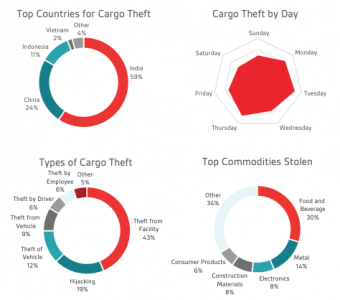 The reports says: “Supply chain corruption is a major element of thefts in China and India, with corrupt employees removing goods they are transporting or accessing shipments stored in warehouses or logistics facilities.

“Thieves generally pilfer small numbers of items, but occasionally manage to steal larger quantities of goods. Other tactics include hijackings, slash-and-grab thefts and counterweighting, where thieves remove goods and then use other items like rocks, sand and water to replace the weight of the stolen goods.

“In addition, poor access control protocols often contribute to the rate of cargo theft in Asia, with terminated employees often retaining facility keys that are then used to conduct thefts at a later date.”

But, said TT Club, “relatively simple security protocols, such as parking in secure locations or ensuring proper access control procedures are being followed, can likely help mitigate the risk of most theft in the country”.

It added: “A significant percentage of incidents involve the theft of goods from facilities, often by current or former employees. In these incidents, BSI has noted that easily correctable security gaps, including ensuring doors remain secured or revoking access for terminated employees, likely could have prevented the majority of these incidents. BSI has also identified the lack of secure parking options as a factor contributing to cargo truck thefts last year in China.”

Globally, the threat from insiders is on the rise, partly owing to the fact that external threats have been mitigated by additional security in recent years.

The report says: “The most frequent types of insider activity identified were unauthorised disclosure of sensitive information (47%) and process corruption (42%).  60% of cases were individuals who had worked for their organisation for less than five years.

“Most insider cases in the study were self-initiated (76%) rather than as a result of deliberate infiltration (6%); ie the individual saw an opportunity to exploit their access once they were employed rather than seeking employment with the intention of committing an insider act.”

The report goes on to offer insights into how companies can effectively screen employees to reduce insider crime.

Meanwhile, the Transport Asset Protection Association (TAPA) in Europe is focusing on creating more secured parking spots. It has issued new parking security requirements (PSRs), and aims to have more than 120 registered PSR sites and 15,000 parking places by the end of this year, and to double that by the end of 2020. 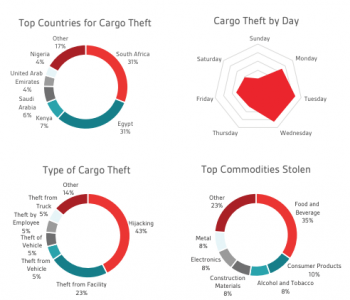 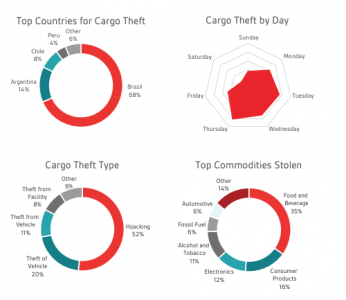