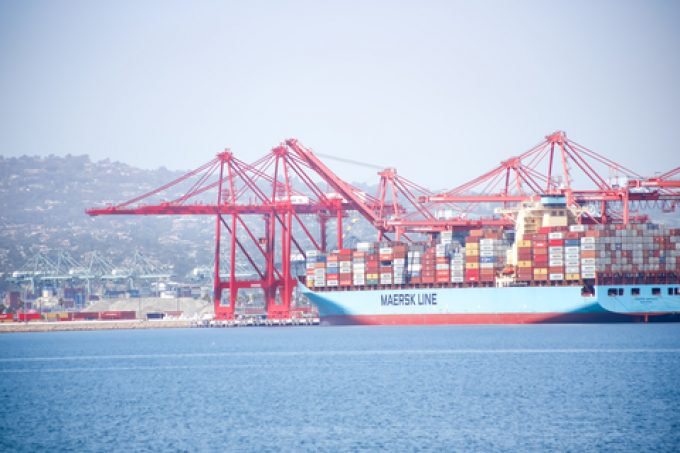 Maersk has shortened its import containers dwell time at key US terminals from 14 days to nine, before they are transferred to an off-dock facility.

The new regime begins on 8 August.

The shipping line said previous moves to resolve the backlog had proved insufficient, adding: “We had until now focused on draying containers with no activity for more than 14 days.

“Unfortunately, persistent congestion continues to impact operations in our key Los Angeles/Long Beach and Newark/Elizabeth gateways… so we feel it’s important to do more to free-up capacity and improve productivity in our marine terminals.

“We may also include containers with confirmed delivery appointments in situations where the appointments have been routinely missed or cancelled.”

The development reflects a shipping sector at loggerheads with a US government that says shipping lines’ detention and demurrage (D&D) charges are ‘gratuitous’ and even illegal in many cases at a time when they are raking in enormous profits. Maersk itself today announced it is upping its full-year profit forecast to $37bn.

The Loadstar reported yesterday on a new enforcement body set up by the US Federal Maritime Commission (FMC) with the stated goal of “robust enforcement” of the new OSRA 22 initiative, and “enhanc[ing] FMC’s capacity to closely scrutinise the conduct of the ocean carrier companies and marine terminal operators” and ensure “fairness” for their American customers.

But shipping lines protest that American shoreside infrastructure is simply unequal to the task, typified by a World Shipping Council (WSC) statement that “…as long as America’s ports, railyards and warehouses remain overloaded and unable to cope with the increased trade levels, vessels will remain stuck outside ports, to the detriment of importers as well as exporters”.

Last week, Maersk outlined a number of factors in the dispute. It said: “Extensive terminal congestion, high waiting times, inland bottlenecks, industry strike action, labour shortages demand surges and domino effects from an influx of transpacific trade have combined to create a chain reaction for the transatlantic network – resulting in delay gaps that are unrealistic to recover and require adjustment.”

In today’s circular, Maersk also suggests customers take care to organise customs clearance before the arrival of their boxes.

“One of the root causes affecting dwell times on terminal is the unusual high number of longstanding containers without customs clearance.”

Fellow liner giant Hapag-Lloyd revised its fee structure late last month, and will levy a $100 fee per box per day from 26 August, for containers “that are past the dwell times of eight days for import (truck moves) and five days for intermodal (rail) import”.

It added: “For all existing overdue import containers (regardless of the number of days that they have been at the terminal), 27 August will count as the ninth day (or sixth day for intermodal) and will start at $100.”

“Removal of antitrust immunity would not preclude ocean carrier vessel-sharing or similar agreements that are pro-competitive and result in operating efficiencies. The continued protection of ocean common carriers operating under the cloak of antitrust immunity is therefore unnecessary and, we believe, detrimental to the promotion of a robust ocean transport market that best serves the international maritime trade of US businesses.”