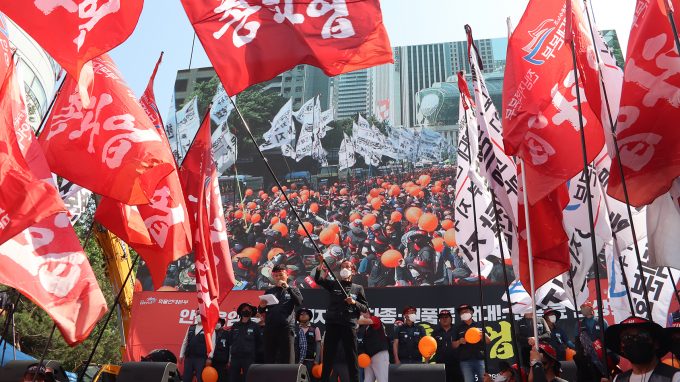 The South Korean government has refused to bargain with striking truckers, beginning the second week of the dispute, after a second round of negotiations collapsed today.

President Yoon Suk-Yeol’s government is standing firm on its position of refusing the Cargo Solidarity Truckers Union demand to make the Safe Trucking Freight Rates System permanent, and has even threatened to issue more executive orders forcing truckers in other segments to resume work.

Daily economic losses of $224m are estimated as a consequence of the strike.

President Yoon’s ultimatum has only incensed the truckers who are now also demanding yesterday’s executive order against cement-lorry drivers be withdrawn.

Altercations reportedly broke out between government officials and cement transport companies today when the officials attempted to serve the executive orders on the truckers. The companies allegedly refused to disclose the truckers’ names, citing privacy concerns.

President Yoon targeted these drivers first as the shortfall of cement supply has brought construction activity to a standstill. Daily cement deliveries are said to be below 10% of usual levels.

The union says the government wants its members to resume work before lawmakers will consider regulations to make the Safe Trucking Freight Rates System, introduced in 2020, permanent. The system was due to expire at the end of the year, but was extended to end-2025 after an strike in June. The union wants the system made permanent to help with rising fuel costs.

Standing with the government is shipper group Korea International Trade Association (KITA), whose vice-chairman, Jeong Marn-ki ,today denounced the strike and called for industrial action to be outlawed.

Mr Jeong said: “The truckers’ union must immediately stop the collective action and come up with a solution that can be a win-win for everyone, including shippers, drivers and transport providers.”

And he urged the government not to yield to the truckers’ demands, claiming that the Safe Trucking Freight Rates System had not improved truckers’ livelihoods but instead increased shippers’ logistics costs.

KITA has suggested revamping the freight rate system and using other ways to calculate a rate based on more objective data on truckers’ income and fuel costs, instead of measuring based on trucker surveys.