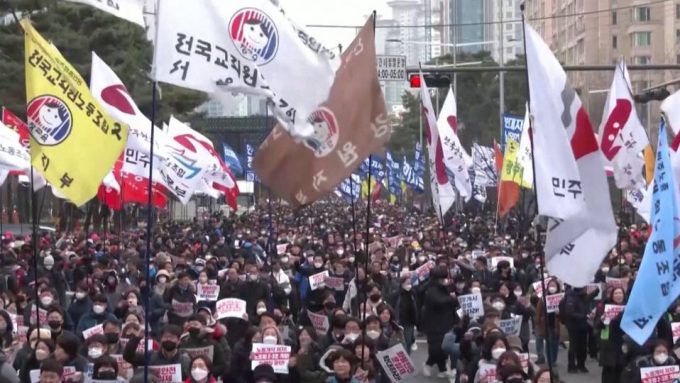 South Korean container shipping companies will temporarily reduce demurrage and detention charges incurred as a result of delayed transport to and from ports due to the truckers’ strike.

The Korea Shipowners’ Association (KSA) announced yesterday it had met with the Korea International Trade Association and Korea Federation of SMEs, and at their request agreed to get its members to cut D&D charges to support shippers.

KSA vice-chairman Kim Young-moo said the shipping companies would consult with the shippers over the extent of the D&D adjustments.

Details of the cuts were not disclosed, but are believed to be substantial as the strike, which began 24 November, enters its third week.

In the first week, daily container traffic in South Korea’s main container port of Busan was less than 20% of normal levels, but is now estimated to be about 81%, according to the Ministry of Land, Infrastructure and Transport.

However, the situation in Gwangyang, the second busiest, is less rosy, with daily container flow being less than 10% of usual volumes.

The government’s resolve not to yield to trucker calls to make permanent the Safe Trucking Freight Rates System, launched during the Covid-19 pandemic in 2020 and due to expire end-2025, as well as executive orders issued by President Yoon Suk-yeol to compel cement truckers to resume work, appears to have had some effect. The president is now considering a similar executive order to tanker truckers.

Minister of the Interior and Safety Lee Sang-min said today 492 cement truck drivers had resumed work by yesterday and 48 others had expressed an intent to return to work. Cement deliveries had recovered to about 90% of normal, he added, and the recovery rate for the deliveries of steel products stands at about 50%.

Meanwhile, the number of petrol stations running out of fuel has fallen from 96 on Monday to 81 yesterday.

Mr Lee added that truck drivers attempting to return to work, who were attacked by colleagues still participating in the strike, should be assured that his ministry will provide personal protection.

The government estimates that the strike has disrupted the delivery of at least $2.7bn of goods in the steel, petrochemicals, oil refining, cement and automobile sectors.