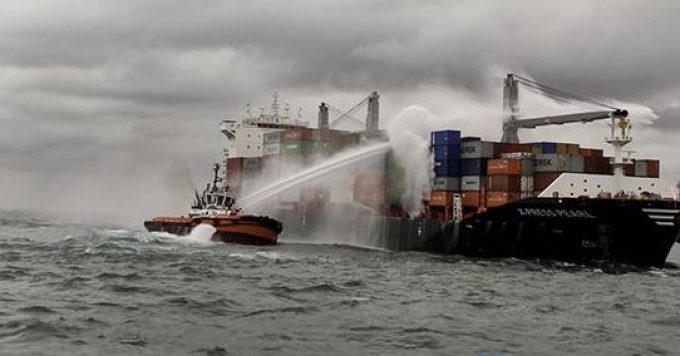 The world’s largest feeder operator, X-Press Feeders, has confirmed that a fire broke out in a container on one of its vessels last night.

The X-Press Pearl was at anchor, some 9km outside the port of Colombo, where it had been waiting for a berth since 19 May, when fire broke out in a box in the deck stacks.

The firm said: “The vessel had taken all precautionary measures throughout the night. However, firefighting is still underway, with the assistance of tugs sent by local authorities.

“Together with local authorities, X-Press Feeders is actively working on various solutions to put out the fire, while maintaining the safety of our crew.”

The Sri Lankan navy confirmed that the vessel was carrying some dangerous goods, including a shipment of nitric acid.

The navy said: “The vessel, which is registered under the flag of Singapore, has carried 1,486 containers, with 25 tons of nitric acid, several other chemicals and cosmetics from the port of Hazira, India, on 15 May.

“[A] special team, comprising Sri Lanka Navy and Ports Authority (SLPA) personnel, got onboard the ship in the evening [20th] and inspected the situation,  where they suspected the fire erupted due to a reaction to the chemicals being transported on the ship.

“Special teams of the navy and Sri Lanka coastguard remain on standby to respond to a possible emergency situation and the SLPA tug is engaged to smother the flames,” it added.

The 2,700 teu vessel is almost new, having only been delivered to X-Press Feeders in February. It is currently valued at $45m, according to vesselsvalue.com

It is deployed on the Singapore Straits-Middle East (SMX) service with three similar ships and X-Press Feeders said it was “looking into alternative options to ensure minimal disruption to our SMX service”.

One of its major customers appears to be Maersk Line, according to the eeSea liner database, which markets it as the Arabian Star service.

According to Maersk schedules, after Colombo the vessel’s next call would have been at Singapore on 29 May.