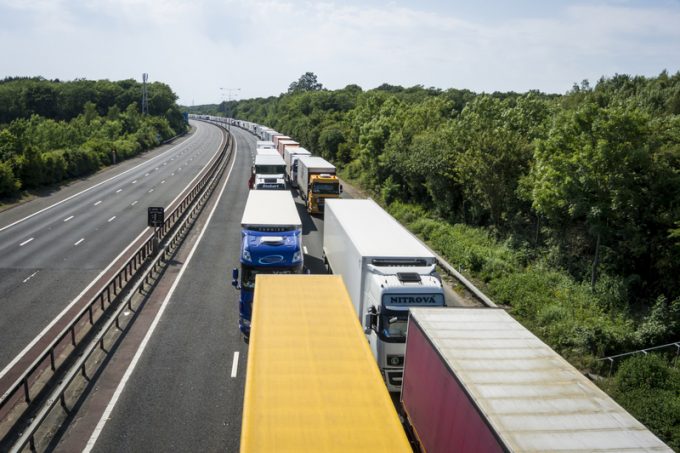 Hauliers remained in limbo today as governments on both sides of the Channel seek a resolution to the border closure imposed by France after the UK identified a new variant of Covid-19.

UK prime minister Boris Johnson is to provide an update later today, with expectations that French authorities will reopen the border to accompanied freight by tomorrow for drivers who test negative for the virus.

Nonetheless, the queue of trucks waiting to leave the UK continues to build, alongside concerns over driver welfare and the spoilage of fresh produce.

Chief executive of Scotland Food & Drink James Withers slammed the “upbeat assessment” of the UK government, noting not only that the situation is continuing to deteriorate, but that the number of stranded trucks exceeds reported figures.

“Contrary to an upbeat assessment from the prime minister yesterday, the situation has been deteriorating,” Mr Withers said.

“We understand the number of lorries parked up in the wrong place in the UK is now in the thousands. There has been a very small amount of seafood that was caught in the backlog that has managed to switch to unaccompanied freight and get to France. But the vast bulk of the problem remains and is worsening.

“Government should be holding a COBRA meeting again today and focusing all efforts on agreeing a protocol with France.”

Other reports suggested the prime minister had failed to reference the impact on goods sent via Eurotunnel, which makes up 26% of the trade between the EU and UK.

Yesterday, both the RHA and Logistics UK urged government to keep driver welfare front and centre of their efforts to address the situation. RHA MD of public and policy affairs Rod McKenzie said “major question marks” surrounded the facilities available to truckers, who “deserve to be treated better”.

Mr Burnett added: “Truckers typically have low Coviod-19 infection rates, given the nature of their jobs and minimal contact they have with others, so it doesn’t make sense that they can’t cross the border into France.”

Director of food & sustainability at the British Retail Consortium Andrew Opie said the situation raised fresh concerns over driver availability in the UK.

“While goods can enter from France, few haulage firms will be willing to send trucks and drivers to the UK without a guarantee they can return to the EU in a timely manner. This is a key supply route for fresh produce at this time of year,” said Mr Opie.

“Channel crossings see 10,000 trucks passing daily during peak periods, such as in the run up to Christmas. We urge the UK government and the EU to find a pragmatic solution to this as soon as possible, to prevent disruption for consumers. Retailers have stocked up on goods ahead of Christmas which should prevent immediate problems.

“However, any prolonged closure of the French border would be a problem as the UK enters the final weeks before the transition ends on 31st December.”

For suppliers, concerns are now building over the financial impact of the ban, with Mr Withers stating that discussions with the insurance industry presented a bleak picture.

“The focus is, rightly, on seafood, as it is the most time-sensitive and threatened sector, but there are other Scottish food exporters and importers whose worries are significant and growing,” he said. “Based on discussions with the insurance industry, we aren’t aware of any companies that will be able to claim for losses, despite suggestions otherwise from UK ministers yesterday.

“Also, the options for alternative markets are minimal. The major supermarkets in the UK are well supplied for Christmas and the hospitality sector is facing another Covid lockdown.”