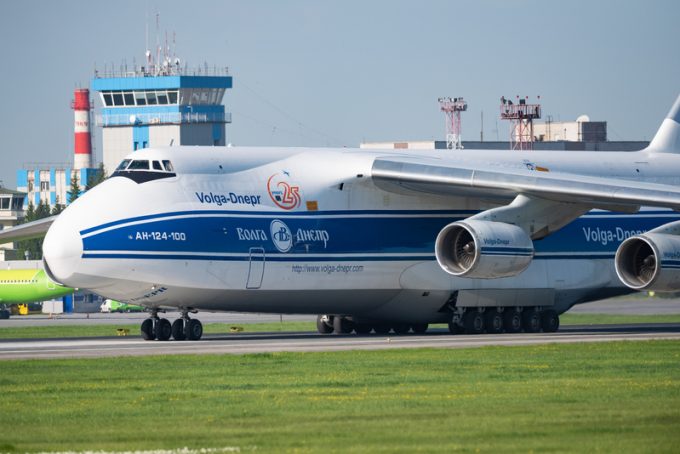 Volga-Dnepr Group has “put safety first” and made what it called the “responsible” decision to ground all its AN-124s, following a recent incident at Novosibirsk, when one made an emergency landing after an engine failure.

The carrier today filed a letter with the Russian aviation authorities to notify them of the decision to ground its eight operational aircraft immediately.

“This is a well-thought through decision. We want to be preactive and pre-emptive and demonstrate that we are a responsible airline where safety comes first,” said Konstantin Vekshin, chief commercial officer.

“We have not received any official notifications or service directives yet, and there are no preliminary conclusions, so we have to suspend the entire AN-124 fleet with immediate effect.

“We strictly adhere to our safety policy, external regulations and public interest.”

Volga-Dnepr is talking to Russian aviation authorities, as well as launching an internal and independent investigation into the recent incident.

Mr Vekshin said: “We want to continue to remain the safest operator in the world; grounding the fleet is in the best interests of society.”

Volga-Dnepr is now talking to customers to re-arrange flights as the aircraft were fully booked.

Mr Vekshin said: “It’s very painful for our customers right now, the market is booming. We want to cooperate and will work with them, but there may be some delays to their shipments.”

He added that the group had made the decision despite a busy market.

“We don’t care how much revenue we will miss – it’s not even relevant right now. Safety is more important than any potential benefits from the peak season.”

Where possible, customers that can load cargo onto a 747 will be accommodated and Mr Vekshin suggested former partner and now rival Antonov Airlines might be able to support others.

However, he added, Antonov should be conducting thorough investigations into its own fleet of AN-124s.

“I think Antonov Airlines needs to follow our example, under the circumstances. Ultimately, it is their call, of course.”

There is no time-definite plan for the aircraft to fly again as Volga-Dnepr insists that “every step must be completed properly”.

Mr Vekshin said: “We need to hear from the Russian aviation authority, and from the manufacturer of the engines which we think is now overdue. We need to see the directives and the results of the investigation. We hope that process will start any day now.

“Once the directives are implemented, we can proceed, but it will take a significant time. We know what part failed, but there needs to be a very thorough investigation with special experts.

“Hopefully this will be a question of weeks, but it has to be as perfect as possible – so guesswork on timing is not good enough.”

Volga-Dnepr has some 60 AN-124 engines, all of which will need to be inspected in depth. They are manufactured and maintained by Ukraine’s Motor Sich, raising questions of whether any delays might be politically motivated.

But Mr Vekshin said: “We are not concerned, politically. Public safety and airworthiness goes beyond politics. We need to work together to tackle this – the market needs it. The AN-124 offers a very important service.”

The Novosibirsk incident on 13 November saw the aircraft, carrying 14 people and about 84 tons of cargo to Vienna, suffer engine failure at about 1,000 feet after take-off. Debris damaged cabling and took out the electrical supply, resulting in loss of communication, all electrical systems, instruments, brakes and thrust reversers, making the runway over-run unavoidable, according to the Aviation Herald.

Observers said the pilots had completed an extraordinary landing in highly dangerous conditions.

“They are heroes, and the pilot in command was exceptional,” said Mr Vekshin.  “They deserve all possible commendations for being truly professional. They will become part of aviation history, as it will be in text books on how to pilot a plane. It was unprecedented.”

Volga-Dnepr believes the AN-24 fleet has another 20-25 years of service, but the carrier has invested heavily in a modernisation programme for the aircraft. It is also the only company in the world with an AN-124 simulator.

“It’s a beautiful airplane and the international world of logistics needs it,” Mr Vekshin said. “We are trying to preserve it for the future. It is irreplaceable – and there are only 20 in the world.”