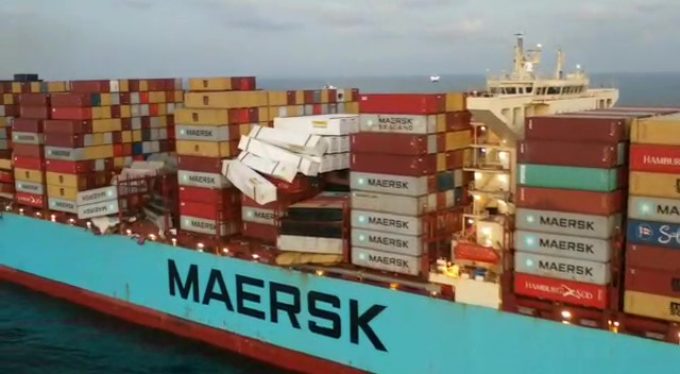 Master mariner at the German Insurance Association (GIA) Uwe-Peter Schieder believes Europe needs to develop a coastguard service similar to that in the US to help eliminate misdeclared cargo.

Mr Scheider, who works in marine and loss prevention at the GIA and is vice chair of the loss prevention committee at the International Union of Marine Insurers, told The Loadstar shipping lines had no idea whether they were carrying overweight or dangerous cargo – or indeed what was in loaded containers.

Mr Scheider said one way lines could address the problem of misdeclared cargo, whether overweight or dangerous, “is to blame your own clients, but that is very difficult”.

He says shipping needs port state control, or what he calls “the duck police”, to do more.

“If the ports blame their clients, they will leave and move to another port – in Europe, we have plenty of ports, but in Australia that is more difficult. In America, the US Coast Guard is very effective and we need to have this in Europe and China.”

The problem is growing because the ships are growing, he notes, but to find a solution it is necessary for regulators to be involved to hold ship operators responsible for their ships, crew and the environment.

“If you ask the lines, they say the problem is misdeclared cargo, but they’ve known this problem for 30 years and what have they done?” asked Mr Scheider, adding, “They will say ‘we’ve introduced technology etc’, but it’s not enough.”

Following Pacific International Lines’ (PIL) decision to impose a $30,000 fine for overweight cargo, which was preceded by a similar penalty imposed on by the carrier on misdeclared dangerous goods in January, Mr Scheider said these penalties and the standards must be enforced.

In the US, the National Cargo Bureau do a very good job, but the industry needs to meet these standards globally, he says.

PIL is not the first line to set penalties for misdeclared cargo; Evergreen and Wan Hai imposed fines of up to $35,000 in 2019, with OOCL and Hapag-Lloyd following their lead.

At the time, TT Club risk management director Peregrine Storrs-Fox said: “We welcome such initiatives, following a spate of fires and growing concerns about cargo packing. We have been collaborating with stakeholders through the supply chain to highlight ongoing risks arising from poorly packed and misdeclared cargo.”

Mr Storrs-Fox has been campaigning on these issues for more than a decade, but the problems around misdeclaration persist. In 2020 -2021 there were 74 cargo fires on containerships according to Mr Scheider, but that figure is an underestimate, he adds, as many  onboard fires go unreported.

“The crew will deal with it, and don’t tell anyone,” he said.

Cargo losses for stack collapses have also increased, notwithstanding this year’s comparatively low overboard losses in the autumn of 2020 and into 2021, a series of major losses in the North Pacific winter – from the ONE Apus to the Maersk Essen and Eindhoven – the losses ran into thousands of boxes, with cargo valued in the hundreds of millions of dollars.