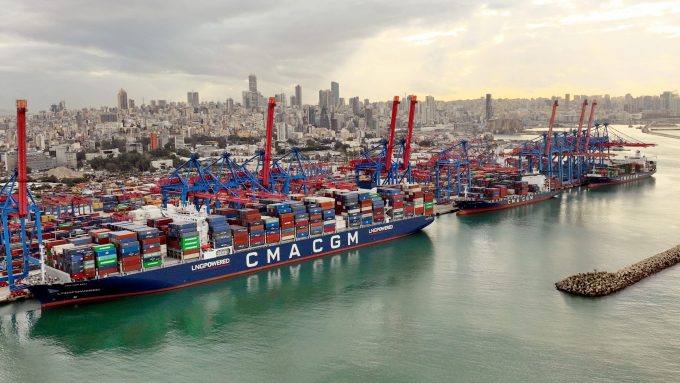 The French carrier, controlled by the Saade family which has strong roots in Lebanon (the CMA part of CMA CGM was founded by brothers Jacques and Jonny Saade in Lebanon some 43 years ago), said it currently accounts for about 55% of the port’s box volumes.

According to the eeSea liner database, CMA CGM is active in nine of the 11 weekly services that call at Beirut, including direct calls on two of the Ocean Alliance’s Asia-Mediterranean services – the MED2 and MED3 – as well as six intra-regional services, three of which it operates in conjunction with Tarros and Arkas, and two feeder services which carry Asian transhipment volumes.

In 2019 Beirut handled just over 1.2m teu, but that dropped to 770,000 last year due to the twin effects of the catastrophic port explosion and coronavirus.

Today CMA CGM said it had committed to a $33m investment plan that will see infrastructure and equipment upgraded and replaced, as well as introducing a digitisation programme at the port.

The terminal was previously operated by a three-way joint-venture comprising US-based Logistics and Port Management, local firm International Port Management Beirut and UK-based Portia Management Services. CMA CGM said it “will use its own expertise and that of the previous operator’s teams in pursuit of its development goals for the terminal”.

The deal follows the acquisition of the container terminal in Lebanon’s second port of Tripoli last year and is a further plank in a sustained investment programme in the country.

“After creating almost 800 jobs over the past two years, today the group engages almost 1,000 employees in Lebanon.

“Furthermore, 400 new job opportunities will follow over the next 12 months,” CMA said in a statement.

Rodolphe Saadé, CMA CGM Group chairman and CEO, added: “Faithful to our commitments to Lebanon, we will be launching shortly an ambitious investment plan that will transform Beirut port’s container terminal into a state-of-the-art facility that meets the best international standards.

“It will be at the service of the Lebanese people and will revitalise the economic exchanges between Lebanon and the rest of the world,” he said.