The UK government has launched a public consultation on the design of a new River Thames road crossing on the outskirts of London.

The Highways Agency this week announce it had narrowed down routes to just one location. It will link the M2 in Kent with the A13 on the north side, close to the ports of Tilbury and London Gateway (location C).

It is preferred to an alternative proposal to build a second crossing adjacent to the Queen Elizabeth II bridge and Dartford Tunnel (Location A) and the HA concluded that a tunnel would be more effective than a bridge.

Highways England senior project manager Martin Potts said: “Deciding where the new crossing should go is a vitally important decision, and we’ve been working hard to identify solutions that strike the best balance between improving journeys, getting value for money and managing environmental impact.

“Our assessments have shown that Location C provides double the economic benefits of Location A, as well as a clear alternative route to the Dartford crossing, reducing congestion and improving resilience of the road network.

“And by choosing a tunnel rather than a bridge, we can minimise the effects of the new road on the environment.” 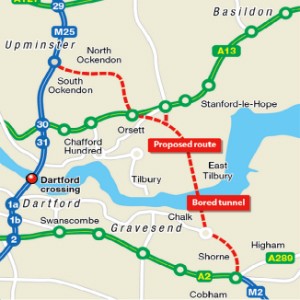 The route of the proposed Location C tunnel

The public consultation process has a deadline of 24 March.

The commitment to creating a new crossing – a first for London since Dartford 25 years ago – was welcomed by freight transport representatives, who said the existing Dartford crossing had become heavily congested, despite the introduction of automatic “free-flow” tolls a few years ago. It is one of the key routes linking the port of Dover and the Channel Tunnel with the rest of the country.

The Freight Transport Association (FTA) has estimated that congestion at the crossing is set to reach pre-Dart Charge levels by 2020.

RHA chief executive Richard Burnett said the crossing between Essex and Kent represented a vital, cost-effective route, heavily utilised by the haulage industry. “Our members report that the current crossing is usually busy and frequently congested. Therefore we are pleased to see that the consultation paper acknowledges that the new route, opening in around 2025, is likely to lift the local and national economy by facilitating the speedy transportation of goods, reducing congestion, curbing greenhouse gas and other emissions, as well as bringing some road safety benefits.

“There is a desperate need to increase capacity on this route, as anyone who uses the Dartford crossing regularly will know. The congestion created is a daily burden for the UK economy.”

However, the FTA said the new link would have to be designed with some of the specific needs of the freight industry in mind if it is to be effective. Malcolm Bingham, FTA’s head of road network management policy, said: “We recognise that a tunnel will have less environmental impact than a bridge but it brings its own challenges for the freight industry.

“The current Dartford tunnels create delays for all when vehicles with dangerous goods or height and width issues pass through, as they either have to wait to be escorted or ensure they are in the correct approaching lane due to the tunnel’s limitations.

“We urge Highways England to ensure that construction includes safety systems to allow these vehicles to move freely through the new tunnel without having to stop,” he said.

Perry Glading, chief operating officer of Forth Ports, which runs Tilbury, said: “The port supports option C, but with the proviso that the proposed crossing and new road through Thurrock provides a step-change in the connectivity to-and-from the port and future-proofs Thurrock.

“National road infrastructure needs to keep pace with business infrastructure investment. In the past 10 years, business at the port has doubled and we are set to double again over the next decade,” he claimed.