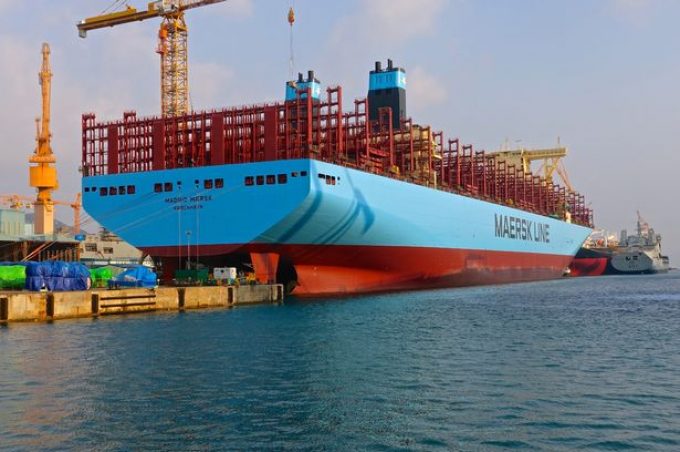 Maersk’s cuts in capital expenditure, including its decision not to order new vessels in the next two years, will clear the way for MSC to take over as the top-ranked ocean carrier, according to Alphaliner,

And The Loadstar’s sources suggested that this “profit over market share” strategy by the Danish transport group may have contributed to its chief operating officer, Soren Toft, being head-hunted by MSC as its new CEO.

Alphaliner noted that the expenditure limit was below the group’s annual depreciation of about $3bn per year, excluding leases, and thus would “result in a shrinking asset base for the company over the next two years”.

Ms Dybeck Happe also confirmed: “There are no intentions now to invest in any large vessels,” and that the strategy of its ocean sector was to “grow in line with the market, or slightly below, in the next couple of years”.

She added: “We will of course, at some point need to replenish our fleet to remain with a competitive network.”

According to Alphaliner data, Maersk’s rivals have “continued to gain ground” in terms of vessel capacity, with MSC and Cosco expanding by 1.1% and 1% respectively in the past year. This compares with the Danish carrier’s 1.5% contraction.

And, with its orderbook of 304,000 teu, MSC will be at least on par with its 2M partner in capacity terms by 2021, if Maersk sticks to its capacity limit of 4m teu.

And there presently seems little appetite in Copenhagen for ordering new ULCVs. During the same earnings call, CEO Soren Skou was sceptical about the cost advantages of building 23,000 teu ships, currently in vogue with Maersk’s rivals.

Nevertheless, Mr Skou appeared to acknowledge that it was still important in the market to offer the biggest ships. He said: “We already, together with MSC in the 2M network, operate by far the largest ships.”

Meanwhile, The Loadstar understands that lawyers in Copenhagen and Geneva are thrashing out the details of Mr Toft’s new contract with MSC and the terms of his exit from Maersk. It was announced by MSC yesterday that Mr Toft and his family would be relocating to Geneva and that his start date would be “communicated in due course”.

Effectively, Mr Toft is on “gardening leave” from Maersk while the legal issues are agreed, but one source told The Loadstar yesterday Maersk “would not make it easy” and that the poaching of this star executive had left a “bitter taste” in the day-to-day 2M relationship.