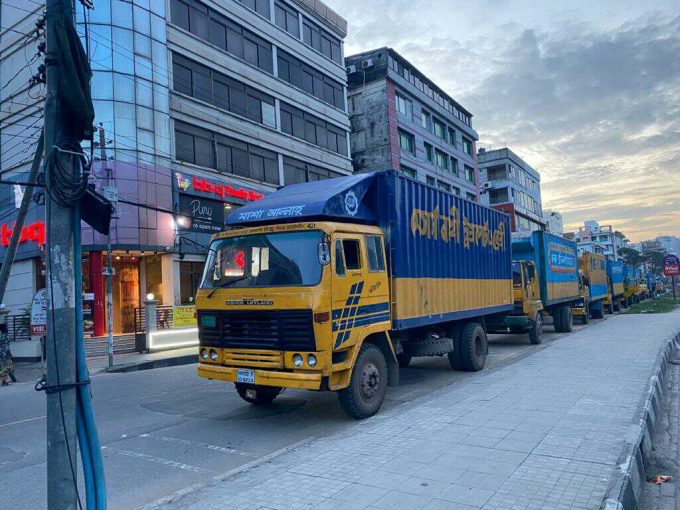 Trucks queue to get into the cargo village at Dhaka airport Credit: Syed Md Bakhtiar
By Bangladesh correspondent
17/09/2021

Air freight rates from Bangladesh have almost doubled in the past month, with rates to the US now at about $12 per kg, to Europe $5 per kg and $4.25 to the Far East, according to local forwarders.

And as demand has grown, the cargo village at Hazrat Shahjalal International Airport in Dhaka has been unable to process shipments, resulting in hundreds of trucks waiting on roads and highways in adjacent areas, creating logjams.

Nurul Amin, MD at Tower Freight Logistics, said the airport authority was reluctant to resolve the air cargo backlog and other related problems.

“Trucks are waiting outside the cargo village for two to three days to unload cargo due to mismanagement,” he told The Loadstar, adding that aircraft were flying without at least 20% of their shipments, due to a failure to hand over cargo in time.

That, along with volatility in sea routes, has added to the pressure on freight rates, he said.

Syed Md Bakhtiar, VP of the Bangladesh Freight Forwarders Association (BAFFA), said the malfunction of the scanners had deepened the crisis at the airport.

“But our cargo-laden trucks are forced to wait outside the cargo village for days, impeding our efforts to quickly send goods,” he said.

Mr Hatem added that as stores re-opened round the world, buyers were demanding that manufacturers send goods as fast as possible. And some buyers were now sharing air shipment costs in order to get goods stored in warehouses ahead of winter and Christmas.