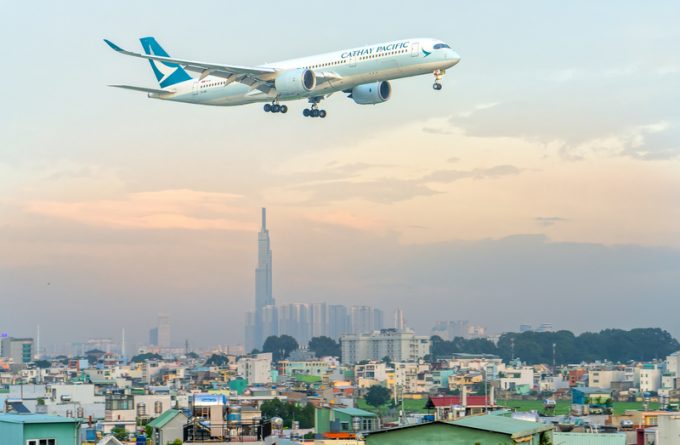 Cathay Pacific is facing retaliatory sanctions on its flights to the US.

The American Department of Transportation (DoT) says Covid-19 restrictions in Hong Kong are unfair and create a tilted playing field.

The Hong Kong government implemented new Covid-19 restrictions on 20 February that include a mandatory 14-day quarantine for airline crews based in the territory – both on passenger and freighter aircraft – returning after an international layover.

While this actually hits Hong Kong-based carriers the most, the US DoT is attacking an exception to the quarantine requirement for flights arriving from mainland China or from Alaska, arguing that the exemption exclusively benefits airlines from Hong Kong and impairs the operating rights of US carriers, denying them “fair and equal opportunity”.

FedEx has filed a complaint about the restrictions and the Anchorage exemption with the DoT, claiming Hong Kong was abusing its quarantine regime, putting it at a disadvantage. The integrator has moved its Hong Kong-based flight crews temporarily to San Francisco in response to the new quarantine requirements.

The DoT argues that the exemption of Anchorage allows Cathay to continue its cargo operations “without impact”.

This argument is somewhat dubious, according to Cathay. The quarantine rules have forced it to cut its skeletal passenger operations by 60% and cargo by 25%, and it also cut back its freighter frequency to the US.

“The new crew quarantine measures have hit Cathay Pacific hard. As a result of crew resource constraints, our weekly freighter frequency between Hong Kong and the US has been reduced from the usual 35-39 flights to 21-28 flights,” a spokesperson said, adding that the new crew quarantine measures only affect airlines with Hong Kong-based flight crews.

Cathay’s traffic report for February shows its passenger business was down 97.9% and cargo tonnage declined 30.7%, with freight tonne-km down 26.2%.

The carrier said: “Demand did begin to recover towards the end of the month, but this was impacted by the introduction of the tightened crew quarantine measures. These also have a notable impact on our capacity and, therefore, our tonnage carried. Overall in February, capacity dipped month on month by 23%.”

However, the US authorities are clearly unimpressed, calling on the Hong Kong government to “restore a level playing field”.

On Tuesday, the DoT issued an order that requires Cathay to file flight schedules for all US flights within seven days, to determine if any are “contrary to applicable law or adversely affect the public interest”. Essentially, this forces the airline to file all of its US flights seven days in advance to be approved individually.

The order is to all Hong Kong-based airlines, but neither Hong Kong Airlines nor HK Express currently fly to the US, so it is squarely aimed at Cathay.

Its spokesperson said: “As an international airline, we will continue to comply with all the applicable aviation regulations in both Hong Kong and the territories to which we fly. Cathay Pacific believes it is in the interest of the general and travelling public for this matter to be resolved among all relevant parties as soon as possible.”

Apparently the argument has been smouldering for a while. According to one report, the US consulate in Hong Kong had complained in February, warning that failure to correct the issue could force the US to take regulatory action.

The Hong Kong Transport and Housing Bureau dismissed the US claims as “unfounded” and reasoned that the exemption for Alaska flights was equally applicable to all airlines.

The current political climate between the US and China in the wake of recent changes to civil rights in Hong Kong is not likely to facilitate efforts to find a solution quickly.