Ports America decides to move out – a blessing in disguise for west coast port of Oakland? 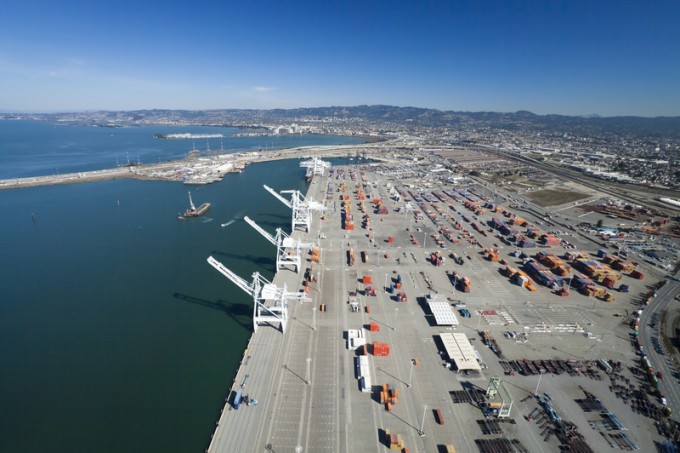 US terminal operator Ports America has decided to end its 50-year concession at the west coast port of Oakland.

Yesterday’s decision appears to represent the first response of the terminal industry to the twin challenges of larger vessels and the concentration of liner volumes into four east-west alliances.

Ports America said it intended instead to focus on its operations in Los Angeles and Long Beach, as well as Tacoma in the Pacific north-west. It has given the port authority 30-days’ notice of stopping operations, with a further 30 days required to move its operations.

A proliferation of independent terminals on the west coast – partly as a result of shipping lines leasing their own berths – is felt to be a primary cause of the extended time it took to clear last year’s congestion.

For example, there are 13 separate terminals in the LA-Long Beach container port complex, whereas in Europe and Asia the largest ports are dominated by one or two operators, which allows them greater operational flexibility when dealing with volume surges.

Drewry’s director of ports, Neil Davidson pointed out last year: “We are seeing a lot more inter-terminal transfer of boxes between [shipping] alliance members. The US west coast has been particularly problematic in this respect – the G6 traffic in Los Angeles-Long Beach is spread across five terminals, which means there is a huge issue in terminal fragmentation.”

It would appear that yesterday’s development is one operator’s first move to address this problem – and it’s a problem that’s not going away. In fact, with the arrival of the 18,000 CMA CGM Benjamin Franklin at LA and Oakland at Christmas (and the less-publicised fact that it was preceded by a 15,000 teu Maersk vessel), ever larger ships are coming to the region, and with them ever larger single exchanges of container volumes.

Ports America’s long-standing joint-venture partnership at LA’s West Basin Container Terminal (WBCT) and its 30% ownership of International Transportation Services clearly provide the platform for its future investment in the region.

On the surface it would appear to be a blow for Oakland, but on closer inspection the port could benefit from the move as it will be able to consolidate cargo at its four remaining terminals, which, port authority officials were at pains to point out, remain under-utilised

“We’re disappointed that Ports America is leaving,” said Port of Oakland maritime director John Driscoll. “But we’re in advanced discussions with our maritime partners here to prevent disruption to the Oakland business.”

It is not as cataclysmic as the departure of a service, and the port’s immediate hinterland will continue to have the same cargo demands. If Oakland loses anything it will be gateway traffic that is transported to the wider Midwest hinterland via intermodal services.

Ports America has undertaken a similar strategy at its facilities on the US east coast, with a commitment to $500m investment before 2030 in Port Newark Container Terminal, which is expected to double the number of containers handled; while at the Seagirt Marine Terminal in Baltimore, another $500m investment programme has drawn up for four new quay cranes, dredging the water depth alongside and developing an on-dock railhead in conjunction with CSX.

The US government is to provide funds for a ‘pop-up port’ project, aimed at improving ...