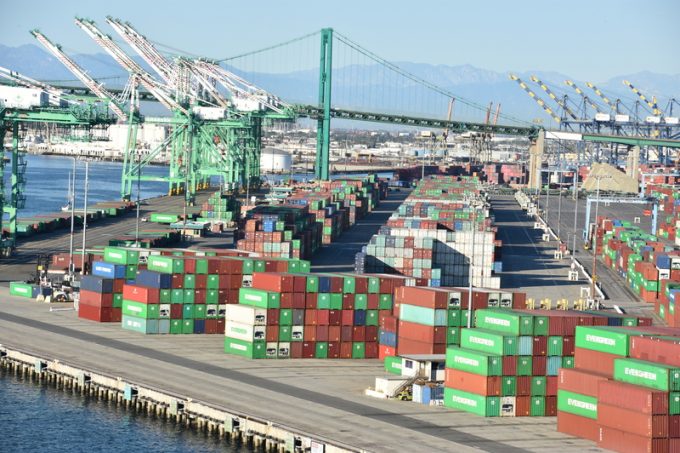 To nobody’s surprise, the spectre of late dwell charges on containers at the prime US port complex receded yet another week yesterday, as the port authorities of Los Angeles and Long Beach deferred a decision until 27 December.

However, the port of LA raised the spectre of charges for empty boxes clogging up terminals.

“We are imploring liner shipping companies to bring in more and larger sweeper vessels to clear out these empty containers,” he said.

“We will look at alternatives, including levying fees against liner companies for empty containers that dwell excessively on our marine terminals.”

The number of empty containers at the ports has climbed steadily, clogging up facilities. At the end of November it was 11% higher than 12 months earlier.

The ports had formulated a policy, first revealed on 25 October, that called for charges on container lines for every rail box that stayed more than six days at terminals, or boxes scheduled to be picked by truck staying longer than nine days. The tariff would start at $100 per container and increase in $100 increments for every additional day at the terminals.

According to the port authorities, the threat significantly reduced the number of long-dwelling boxes at LA and LB, registering a combined drop of 46% in containers since the planned fees were announced. In light of these improvements, they have kept postponing implementation.

Dwell times for rail containers have improved significantly, from a high of 13 days in the summer to an average of two days. However, other metrics look less favourable. Some terminal operators have reported less-impressive improvements in box dwell times on their premises than the numbers for the port complex. By their estimates, the reduction of long-dwelling containers has been in single digits.

Up the coast, the largest box terminal at the port of Oakland has levied ‘excessive dwell charges’ on containers since 1 December. The Oakland International Container Terminal, which handles about 70% of the port’s box traffic, charges cargo owners for containers that stay more than seven days. The daily fee starts at $50 on day eight, rises to $75 on day 13, on to $100 on day 18 and on day 23 it climbs to the top level of $150 a day.

But the port of Los Angeles is contemplating a fee for empty boxes, announced last week at an event attended by Mr Seroka.

The pressure on the ports is not expected to ease for months, except for a brief respite during the lunar new year break. Mr Seroka also warned last week that US imports would remain elevated into February and then increase again after the holiday break as retailers replenish depleted inventories.

The Port Tracker, published by the National Retail Federation and Hackett Associates, forecasts a 4.6% year-on-year rise in imports this month, followed by growth of 9% and 7.3% respectively for January and February.

As the ports continue to operate beyond capacity and warehouses remain filled to the rafters with cargo, the pressure on the docks from long-dwelling boxes and empties seems unlikely to diminish, leaving operators wondering if charges will be finally introduced at Los Angeles and Long Beach, although some forwarders doubt this will happen.

Container lines are not the only operators left guessing if they are going to be hit eventually by new charges. APM Terminals at Los Angeles has just pushed back the implementation date for a fee on truckers regarding appointments. It plans to hit truckers who fail to show up for an appointment with a charge of $65, with $25 for cancelling an appointment less than eight hours in advance, and $100 for performing a gate move without an appointment.

The new regime was supposed to come into effect on 1 January, but APMT has shifted that to 1 March, to allow for “more user-friendly” changes to be made early in the new year to its trucker appointment system to take root.