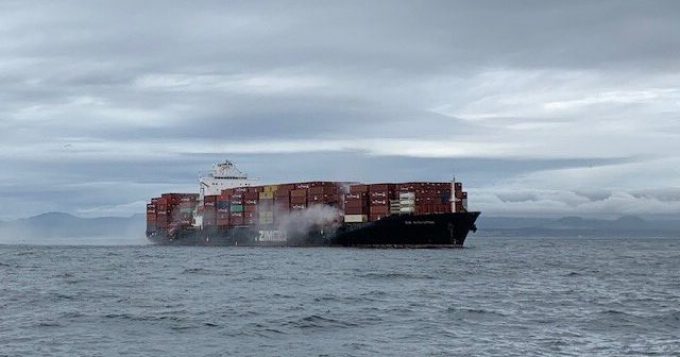 In its latest report on the Zim Kingston, which caught fire off the coast of Vancouver on Saturday, owner Danaos Shipping says smoke from the fire is dispersing before any fumes reach population centres.

The fire on board is now said to be limited to a number of “hotspots”, according to a firefighting expert, with firefighters and at least six crew on the vessel assisting with the control of the flames.

However, the picture above, taken by the Canadian Coast Guard on Sunday, appears to show two stack collapses and two hot spots, one aft of the accommodation block and the other towards the bow.

A spokesperson for Danaos told The Loadstar the company had said two boxes had caught fire, but it had not specified in its updates where the containers were situated on the ship. It seems the main fire was in the forward area and a second stack collapse may have led to another fire.

Danaos commissioned a team of experts and marine firefighters to board the ship to ensure conditions allowed for the safe return of the vessel’s crew.

Once the vessel has been made safe, it is expected to berth in Vancouver to discharge undamaged cargo and to handle damaged containers from the stack collapse that precipitated the fire.