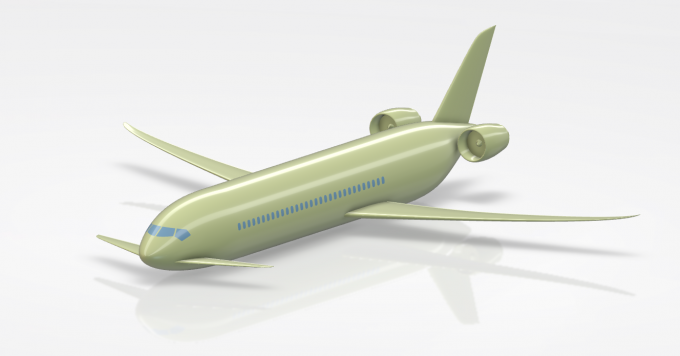 The UK government-funded FlyZero project is eyeing hydrogen as the main driver of carbon-neutral passenger flight, but it is likely there will be some unhappy implications for belly freight, one of  the main revenue streams for carriers.

The concept aircraft, a midsize hydrogen-powered jet, was revealed this week at the Aerospace Technology Institute (ATI).

Despite the challenges of using hydrogen as a fuel – including energy density many times lower than conventional jet fuel – the ATI claims the aircraft would be more than capable of transatlantic flight, even London to San Francisco, without having to refuel.

“At a time of global focus on tackling climate change, our midsize concept sets out a truly revolutionary vision for the future of global air travel, keeping families, businesses and nations connected without the carbon footprint,” said FlyZero project director Chris Gear.

“This new dawn for aviation brings with it real opportunities for the UK aerospace sector to secure market share, highly skilled jobs and inward investment while helping to meet the UK’s commitments to fight climate change.”

It is not all good news, however. Belly cargo has become integral to aviation’s business model, surpassing pure air freight by early 2020 and so important for airlines that on some flights, it accounted for as much as 40% of revenues.

Mark Diamond, a consultant with IFC aviation, was quoted as saying as far back as 2018, that “on average, 50% or more of international flights are only profitable due to cargo’s contribution”.

But if the new design is anything to go by, passenger airlines will soon be facing a two-fold hit to their bottom lines, as not only are the new fuels likely to be considerably more expensive, but they will take up dramatically more space, as well.

In the case of liquid hydrogen – currently, 15 times more expensive than kerosene – around four times the space is required to store the same amount of energy, meaning belly cargo capacity, seats, or range will have to be sacrificed.

But the FlyZero concept is certainly not about sacrificing the latter.

“We’re currently looking at the midsize, halfway between wide- and narrow-body,” explained spokesperson for FlyZero Nathan Harrison. “At the end of the project we will have three sizes, and this will include a regional concept, a narrow-body and this midsize… [which] will have a range of 5,200 nautical miles, enough for a transatlantic flight and a bit further.”

By comparison, today’s Airbus’ A320neo can carry 200 passengers 3,400 nm on a full tank of kerosene. But Airbus has released a hydrogen-turbofan concept aircraft, the ZEROe, also with capacity for up to 200 passengers, but limited to just 2,000 nm – less than half that of the FlyZero.

“The cryogenic fuel concept is in the belly of the aircraft, and that would reduce belly capacity, and ultimately that’s a consideration for the midsize concept,” said Mr Harrison. “Liquid hydrogen shows the most potential. Weight is crucial for aircraft… we find that the weight of ammonia is a huge challenge, as well as the toxicity. When it comes to volume, this is important for things like drag reduction, and so we see that liquid hydrogen has the advantage over gaseous hydrogen… but it still comes with challenges in terms of storage in cryogenic fuel tanks.”

And FlyZero has the backing of the UK government. Transport secretary Grant Shapps said: “As we build back greener, it’s crucial that we place sustainability at the heart of the aviation industry’s recovery from Covid-19. This pioneering design, led by a British organisation, brings us one step closer to a future where people can continue to travel and connect but without the carbon footprint.”