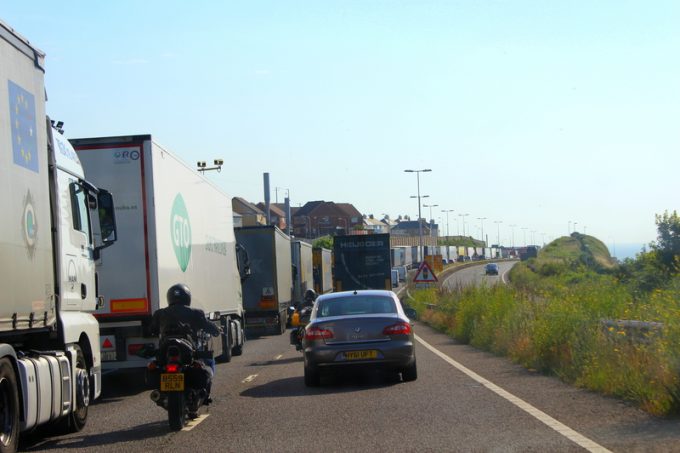 Supply chain operators are urging France to withdraw yesterday’s ban on accompanied freight from Britain, imposed after the UK identified a new strain of Covid-19 on Saturday.

A raft of European states have announced border closures with the UK following news of the potentially faster-transmitted strain of the virus, with France taking its ban one step further, blocking the flow of all accompanied freight across the Dover-Calais strait.

Logistics UK general manager Alex Veitch said: “Driver health and safety is our key concern, and it is essential that they continue to be recognised as key workers and given access to testing, if necessary, as a priority to ensure the continued movement of goods to and from France.

“Retailers will be making every effort to ensure there is stock within the system, including fresh produce; it is important we remember that inbound traffic still has access to the UK.

On Twitter, the RHA said: “HGV drivers are not great transmitters of disease. They work alone in their cabs (where they also spend their rest breaks) and the idea of them roaming around the French countryside, infecting thousands of people is laughable.”

International union the IRU joined condemnation of the ban, noting that it put 85% of all EU imports into the UK at risk, and “literally cuts off the supply chain from the EU to Ireland”.

Secretary general Umberto do Pretto added: “Completely closing borders to truck movements anywhere in Europe is unprecedented in the current pandemic, trucks have been moving across Europe throughout the entire pandemic. The EU Green Lanes initiative, supported by all EU members made clear that continuity of logistics chains is crucial and must be protected.

“The current French action makes no sense and will only make things worse in an already uncertain period due to the looming Brexit transition.”

Reuters quoted French transport minister Jean-Baptiste Djebbari, who said his government was working on “Europe-wide sanitary protocol measures in the coming hours” that will allow for the imminent resumption of traffic flows with the UK.

Some 10,000 trucks a day cross the short strait and, in the Christmas build-up, the quantity of foodstuffs increases – Scotland Food & Drink puts the value of this at some £5m daily.

Its chief executive, James Withers, said the ban needed to be lifted and trucks needed to be back moving again by Tuesday morning at the latest to prevent millions of pounds of wastage of perishable products.

“We have heard from companies with dozens of lorries now stuck, having travelled overnight to Dover or the Tunnel,” wrote Mr Withers. “They are carrying perishable products worth millions and the clock is ticking for that product to survive these delays… the timing of this could scarcely be worse for many businesses with critically important markets scheduled as part of the big pre-Christmas sales rush.

“As things stand, Scottish seafood exports will not reach them, which will compound the losses businesses have already suffered as a result of Covid-19 this year.”

Mr Withers urged governments on both sides of the Channel to agree to some form of protocol that would get freight moving as swiftly as possible, suggesting testing for drivers to provide reassurance.

Were the ban to exceed the narrow timeframe given, Mr Withers said this could affect imports into the UK as well, with drivers from Europe not wishing to “get stuck”.

CEO of UK Major Ports Group Tim Morris said the situation was “clearly serious”, but noted that the UK had not been “cut off from Europe entirely”, with roughly two-thirds of freight moved unaccompanied.

He added: “It’s very important that the UK government gets around the table with their French counterparts as soon as possible.”

A spokesperson for Air Charter Service told The Loadstar flights had not been grounded, with goods continuing to move by air, but said there was an expectation that capacity may drop.

“As outbound passenger flights are now not able to take passengers, we expect many flights will be cancelled,” said the spokesperson.

Joining calls from Scotland’s first minister Nicola Sturgeon and London mayor Sadiq Khan, Mr Withers said this latest development must result in a Brexit rethink, calling on the Johnson cabinet to recognise “we’re in the midst of a perfect storm”.

“To risk further disruption and financial damage to businesses in 10 days’ time is completely unacceptable, the end of the transition must be delayed, everything has changed,” he said.