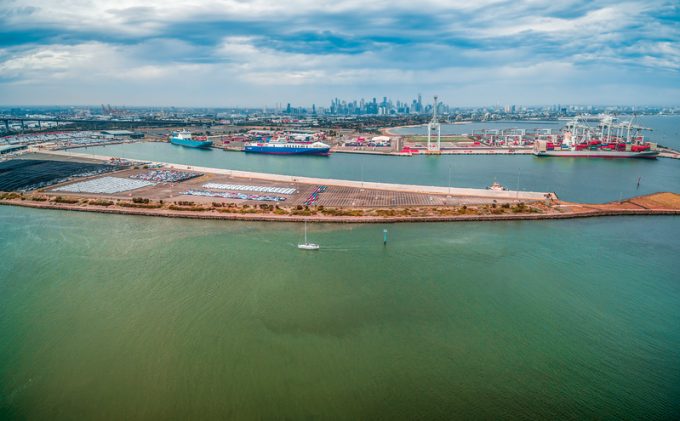 The size of container vessels calling at the port of Melbourne looks set to dramatically increase after Cosco, OOCL and ANL revealed plans to upscale their joint Asia-Australia service.

According to Loadstar sources, the three lines intend to dramatically upgrade the size of the vessels on the route as part of a revision of the service.

The existing string comprises five 5,500-6,000 teu vessels, but Melbourne port’s regulatory authority has given clearance for OOCL and Cosco to berth vessels in the 8,000-8,900 teu range.

Specifically, the Victorian Ports Corporation (VPC) has given permission to conduct berthing trials for the 8,063 teu OOCL Shenzhen, the 8,888 teu OOCL Beijing and the 8,200 Cosco China.

The trials will initially take place at the Victoria International Container Terminal (VICT), an ICTSI-group company, located at the port’s Webb Dock, while simulation and studies to increase vessel sizes at Melbourne’s Swanson Dock are continuing.

Sources are cautiously optimistic that Swanson Dock could commence trials to receive larger vessels in the next six-to-12 months, although there are likely to be significant constraints attached, due to the narrow channels in the river and basin.

The introduction of the new vessels will go some way to quietening accusations that Melbourne’s two other terminal operators – DP World and Patrick – had been lobbying behind the scenes to prevent VICT from receiving authorisation to handle larger ships.

Access to the DP World and Patrick terminals at Swanson Dock is limited and the longest ship to call there was the 306-metre, 6,500 teu Al Kharj, and the two operators are understood to fear the introduction of larger box ships to the port as it would render their facilities uneconomic.

Controversy has surrounded VICT since it opened; it found itself a target of the Maritime Union of Australia last year, angered by the advance automation technology it employs in the yard and on the quayside.

However, the continued delay in gaining permission for the terminal to serve larger vessels has also been said to be the cause of Sydney taking over from Melbourne’s long-held position as the country’s premier container gateway.

With Sydney now able to handle vessels of up to 10,000 teu, its advantage is obvious, even though VICT claims it can handle ships up to 12,500 teu if given permission.

The berthing trials come amid a further expansion of shipping capacity into Australia, after Hyundai Merchant Marine, Evergreen and APL announced plans to introduce a new Asia-Australia service in August.

The new A1X service, with five 4,600 teu vessels, according to Alphaliner, will represent the first time the South Korean carrier has deployed its own ships on the trade – it is expected to contribute two of the five vessels.

And in a further twist, OOCL and PIL are to welcome Cosco as a slot charterer to their joint Asia-Australia AAA service, and then split the string into two: the AAA1 and AAA2. This will see the six vessels of 5,400-5,888 teu capacity increase to nine, although their capacity has yet to be confirmed.

The splitting of the string is due to interest in a new direct call at Brisbane, as well as improving connections between Australia and South-east Asian ports, although Alphaliner warned the new injection of capacity could hit freight rates.

“The new AAA 1/AAA 2 enhancement is expected to add some 5% to total Far East-Australia capacity. It follows the announcement last week by HMM, Evergreen and APL of the launch of a new China-Australia service in August this year.

“Total Far East-Australia capacity will increase by over 10% as a result of the new service launches, with freight rates expected to come under pressure yet again.

“SCFI spot freight rates from Shanghai to Melbourne have continued to dip and now stand at $700 per teu, down 50% from a high of $1,400 per teu earlier this year,” it said.