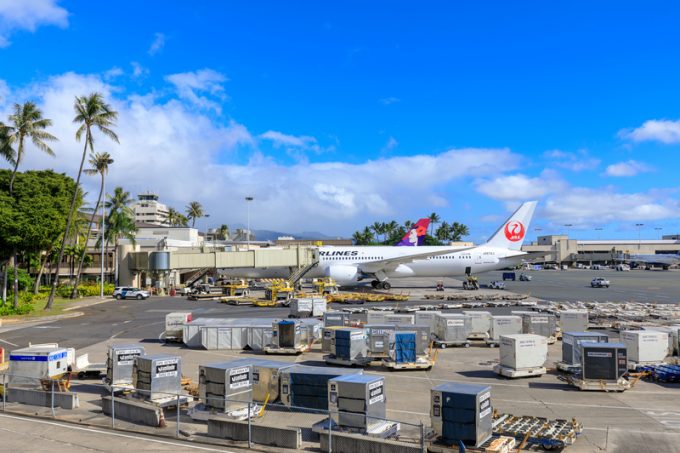 On Wednesday, Hawaiian Airlines (HA) added Fukuoka to its network with the launch of an A330 service from its Honolulu base.

The operation, which runs four times a week, reintroduces the Japanese city to HA’s roster after a five-year hiatus. It had run flights on the route between 2012 and 2014, but suspended them owing to sinking passenger numbers.

In Fukuoka, HA’s cargo is handled by partner Japan Airlines Cargo (JAL), which will also handle the cargo of HA’s new flights to Tokyo Haneda that are due to start next year.

It is a manifestation of the pair’s efforts to work more closely together on the freight side.  Last month, the US Department of Transportation gave the green light to a joint-venture between HA and JAL, but withheld approval for antitrust immunity.

Insisting that antitrust immunity is vital for their full collaboration, the two carriers have broadened their proposed venture to include more connections in the Asia-Pacific region, as well as India and Russia. JAL is planning to launch flights to Bangalore and Vladivostok in the first quarter of next year, which would offer additional markets for HA.

The partners hope the proposed expansion of the joint venture’s scope will elicit a more favourable response from the US authorities.

So far, interline activities between JAL and HA on the cargo side have been limited, but they intend to build up their collaboration in this sector as well.

“We certainly will be looking at any opportunities that are available. India is a very good cargo market,” said Brad Matheny, managing director of cargo at HA. He added that HA Cargo had appointed a GSA for India.

“In the months ahead we will look at our networks to see how we can complement each other more,” he added.

An infusion of cargo from new markets would not come amiss. After years of strong growth in cargo volumes and revenues – driven by capacity and network expansion and followed by robust market growth – HA has had to contend with decline in the market this year, especially in the international segment.

“Japan and much of Asia has been hit harder than most other regions by the global downturn in the cargo business. Our largest presence is in Japan,” Mr Matheny said. HA Cargo had fared better in the domestic market, he added.

With the exception of a couple of A321 aircraft, the airline’s fleet is not set to grow in the coming year. Mr Matheny hopes to add a fourth freighter to his fleet of ATR-72s that the airline uses for inter-island traffic in Hawaii, but it is unclear when that will materialise.

HA, which had operated all-cargo aircraft in the 1940s, got back into the maindeck cargo game in August last year with two ATR-72 freighters. A third joined the line-up this year, but management stepped on the brakes with the fourth unit.

“We had a letter of intent but decided not to go through with it, because of some issues with the aircraft that could not be corrected by the vendor,” Mr Matheny reported. “We are looking for another aircraft. We hope to have that delivered late next year.”

The start of the freighter operation had been bugged by delays, but it has gone well since its inception, according to him. Much of the volume is intra-state traffic but some connects to HA’s longhaul flights, primarily its routes to the US mainland.

After 2020 the airline is planning to return to growth mode. In the first quarter of 2021 the first of 10 B787-9s is scheduled for delivery, and HA has options on 10 more of these aircraft.

“This will give us an opportunity to go to new and further destinations,” said Mr Matheny, adding that the 787-9 offers more capacity than the A330, which is currently the largest aircraft type in the airline’s fleet. After the retirement of its 767s, flights outside the home state are all done with A330 and A321 equipment.

At this point, no decision has been made on routes for the planes, said Mr Matheny.

With the market in low gear and HA’s capacity and network expansion in a holding pattern until 2021, the focus for the cargo division has been more on processes and technology. In August, it brought in a new weight and balance system, which has reduced paper processes and improved productivity, according to Mr Matheny.

“We’ve been able to pre-plan our narrowbody utilisation better. It has improved by 10%,” he said, adding that loading percentage had gone up markedly.

Several initiatives are in the pipeline or in early stages of implementation, from work to beef up its electronic processing capabilities to mobility platforms and better remote access to its IT platform and a warehouse scanning system that is going to be rolled out in all stations where HA performs its own handling. HA is also deploying self–service kiosks in stations where it handles its cargo.

ULD provider Unilode is adding another vital piece to the puzzle. As it equips its containers and pallets with Bluetooth devices, Mr Matheny and his team look forward to beefing up cargo visibility, both in terms of tracking and monitoring ambient conditions of temperature-sensitive shipments. It is installing Bluetooth readers in all its stations in Hawaii and has started working on this with its larger business partners.

“This is a game–changer for us. We will be able to offer some value-added options for our customers,” Mr Matheny said.

Aircraft manufacturer ATR is bullish on the market for turboprop freighters, which make up more ...