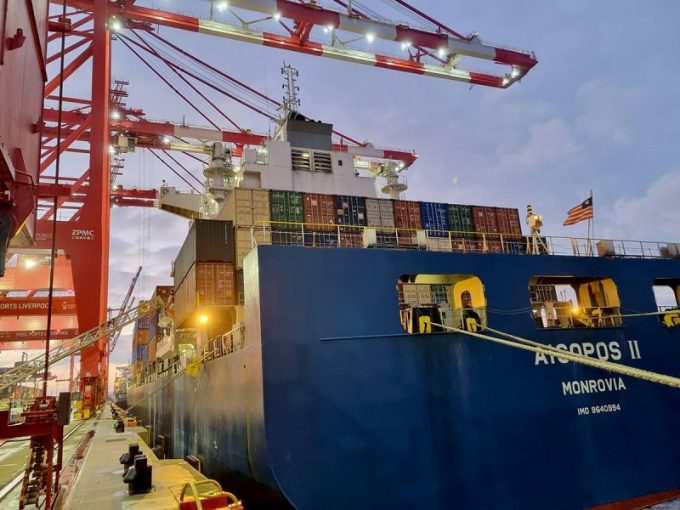 As the major container lines struggle to maintain direct calls at the UK’s southern container hubs, another full load of imports from China has arrived at the port of Liverpool.

The 2,034 teu Aisopos 11 arrived at Liverpool at Saturday morning, completing its third voyage from China for Allseas Global Logistics under its China Xpress NVOCC banner.

The vessel was due to be worked at the T2 Terminal after its 27-day passage from Ningbo and Yantian, but at the time The Loadstar went to press today, it had yet to depart.

According to Allseas Global, including previous calls on 16 August and 24 October, the 2016-built sub-panamax ship has discharged and loaded more than 8,000 teu at Liverpool for UK shippers and retailers.

Charter costs are high however, the forwarder is paying the owner $100,000 a day for the ship on a two-month hire, having paid a more modest $39,500 a day on the previous two-month charter.

Shippers are increasingly turning to ad-hoc entrepreneurial liner services to mitigate the uncertainty and poor service levels of the mainstream liners, especially for the UK, where long-term call omissions, due to port congestion and delays in relaying cargo overland at other hubs, has stymied supply chains.

Moreover, landside congestion and the acute shortage of haulage serving the southern box hubs has added to the problems for shippers.

According to The Loadstar’s sources, several ocean carriers are unable to provide haulage for the remainder of January, with one contact being advised by his carrier yesterday that the earliest date for haulage would be mid-February.

“We are pulling our hair out, as having paid a fortune and waited months to get the boxes to the UK, we now can’t get them out of the port. And to rub salt into the wound, they won’t waive the demurrage,” he said.

It is not only importers that are suffering. With the ongoing rationalisation of port calls by the alliances, it looks like North European exporters are in for an even tougher year trying to fulfil orders.

“Sometimes we feel the carriers regard our export bookings like something on the bottom of their shoes,” one irate UK-based NVOCC told The Loadstar recently.

“They would much prefer to fill their ships with empty containers and get back to China as quickly as possible to load more cargo at stupidly high rates.”

However, the elevated market rates and the exclusion by some ocean carriers of cargo from small to mid-sized shippers has opened the market to smaller liner operators and standalone NVOCCs that, prior to the pandemic, would have been unable to survive against the might of the major carriers.

One strong player in the market is UAE-headquartered NVOCC CargoGulf ,which has grown its network across several routes, offering shippers its own fleet of containers in addition to accommodating shipper-owned boxes.

This self-styled “hardcore NVOCC” has expanded its independent services ex-Asia from two to five and has just released February load dates in North Europe for an ad-hoc sailing to Arabian Gulf ports.

UK port operator and owner Peel Ports has appointed Claudio Veritiero (above) as its new ...