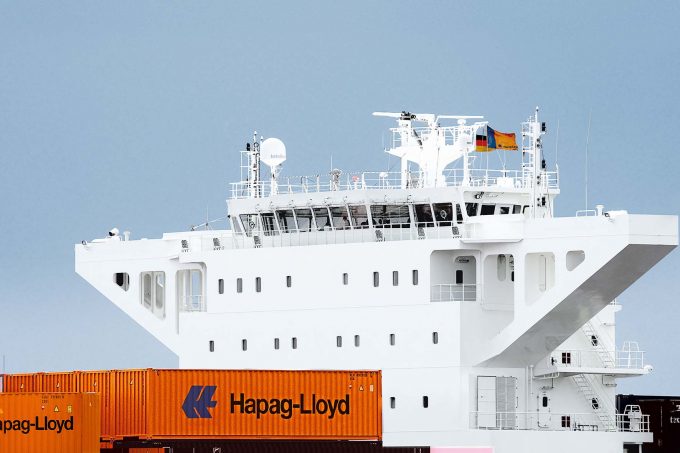 Hapag-Lloyd has finalised an order for six 23,500+ teu dual-fuel LNG-powered vessels, to be delivered between April and December 2023.

The ULCVs, which can also run on conventional bunkers, will be constructed at South Korea’s DSME shipyard at a cost of some $1bn.

They will, says the carrier, will be deployed on THE Alliance’s Asia to Europe service.

Hapag-Lloyd CEO Rolf Habben Jansen said: “With the investment in six ultra-large container vessels we will not only be able to reduce slot costs and improve competitiveness on the trade, but also take a significant step in modernising our fleet.

“Additionally, we will further reduce our environmental impact.”

Hapag-Lloyd has experience of operating an LNG-powered ship, having converted one of the 17 ‘LNG-ready’ ships it inherited from its merger with UASC. However, the retrofit of the 15,000 teu Sajir is understood to have cost in excess of $30m, ruling out any further conversions.

Opting for gas-powered newbuilds in the decarbonisation era puts Hapag-Lloyd in the same camp as the Ocean Alliance’s CMA CGM, which received the first of nine 23,000 teu LNG-powered vessels in September.

However, it puts it at odds with market leader Maersk, which maintains that LNG is not the long-term answer to cutting emissions.

During Maersk’s Q3 earnings call last month, CEO Soren Skou suggested such ships represented a “technology risk”, saying: “We don’t believe LNG is going to play a big role for us as a transition fuel, because it is still a fossil fuel. We would rather go straight to a CO2-neutral type fuel.”

Its 2M partner, MSC, has also said it would also not invest in LNG for any of its newbuilds, saying it was “not a viable option”.

Nevertheless, the Hapag-Lloyd order is good news for the SEA-LNG industry foundation lobby group, which claims that LNG is the “most environmentally friendly, readily available fuel for shipping today”.

Meanwhile, THE Alliance has published a revised east-west network, effective from April next year.

Alphaliner commented: “The most important changes on the transpacific are the start of a new Far East to US Gulf EC6 service and the upgrade of the Asia-US east coast EC1 from ships of 8,000-9,500 teu to a fleet of 13,500 teu.”

The consultant also noted that THEA would be reinstating its Asia-North Europe FE4 loop, which was suspended in May and merged into the FE2 string. Until April, the THEA partners intend to cover FE4 demand with a programme of extra loaders.

“The lines will separately provide advice regarding participation in the extra loader programme,” said an advisory on 16 December.

The revised schedule of the FE4 loop is bad news for the UK’s London Gateway port, which is dropped in favour of a double call at Rotterdam and The Loadstar understands that, from April, UK cargo to and from the FE4 service will be feedered to London Gateway from the Rotterdam hub.

The decision not to maintain a direct UK call with the reactivated FE4 loop will be a concern for UK shippers who fear the UK will be consigned to feeder status due to capacity constraints at its main container ports.