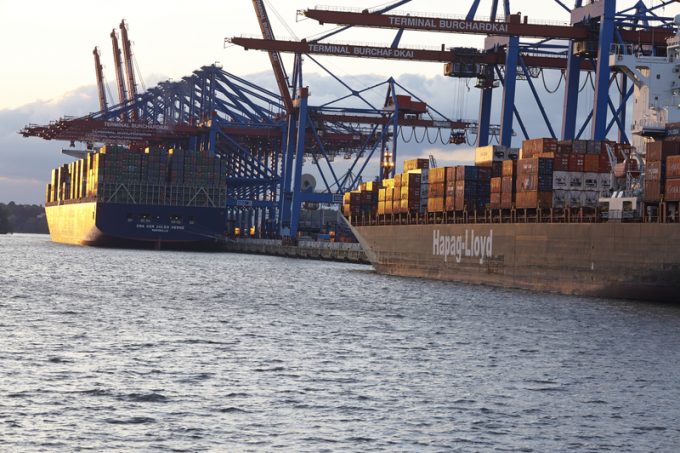 As their network coverage becomes compromised by an aggressive blank sailings strategy, ocean carriers are turning to slot charter deals with members of rival ocean alliances to cover their contract commitments.

Effective next month, Hapag-Lloyd has agreed a slot charter with Ocean Alliance member CMA CGM which, it said, would “strengthen” its coverage in Asia and provide dedicated connections for the North Europe Benelux ports and the UK’s Southampton.

The slot charter is outside Hapag-Lloyd’s THE Alliance membership and won’t involve any other partners in the vessel-sharing agreement.

Hapag-Lloyd has dubbed the service its Far East Loop 9 (FE9), and the first departure, by the 17,292 teu APL Merlion, will be from Qingdao, China, on 14 February.

At the same time, Hapag-Lloyd announced it was suspending its standalone China-Germany Express service (CGX), with the final departure being the 4,045 teu Limari from Shanghai on 1 February for discharge at Wilhelmshaven. The carrier launched the CGX service last April as a two-port loop express service between DaChan Bay and Hamburg at the height of the demand boom, deploying eight panamax vessels.

Vespucci Maritime CEO Lars Jensen said there could be more cross-alliance agreements to come. He said: “The dramatic decline in demand, especially on Asia to North Europe and Asia to US routes, has forced the carriers to be busy cancelling sailings to attempt to avoid too much overcapacity.

“This leads to a reduction in their service coverage, and an obvious solution for a carrier is precisely what we are seeing here.”

Mr Jensen noted that before the current three alliances were formed, from four previous VSA groups in 2017 following the bankruptcy of Hanjin Shipping, there was a “quite complicated web of slot charter agreements criss-crossing the alliances”.

Indeed, more recently, in January 2020, Hapag-Lloyd signed a slot purchase agreement with the 2M partners, Maersk and Hapag-Lloyd, which it said would give them better coverage to certain markets.

A carrier contact told The Loadstar today that the Hapag-Lloyd/CMA CGM slot charter deal was, “on the face of it, a win-win” for both carriers.

“Hapag gets to keep its customers happy and mitigate the impact of THE Alliance blankings, and CMA CGM gets some welcome additional bookings to improve its voyage results,” he explained. “But Hapag will need to make sure that CMA CGM does not poach its business, and will probably restrict the slots to long-term-contracted cargo,” he added.

Meanwhile, during the first quarter of the year, the EC’s competition directorate is expected to make public its preliminary conclusions from the review of the consortia block exemption regulation (CBER), which allows carriers with a combined market share of below 30% to set up vessel-sharing agreements to improve operational efficiency.

The current CBER agreement expires on 25 April 2024 and has come under fierce criticism from shipper lobby groups as being “too vague” and “no longer fit for purpose”.

The re-emergence of cross-alliance slot chartering will add another facet to the pro and anti-CBER arguments.