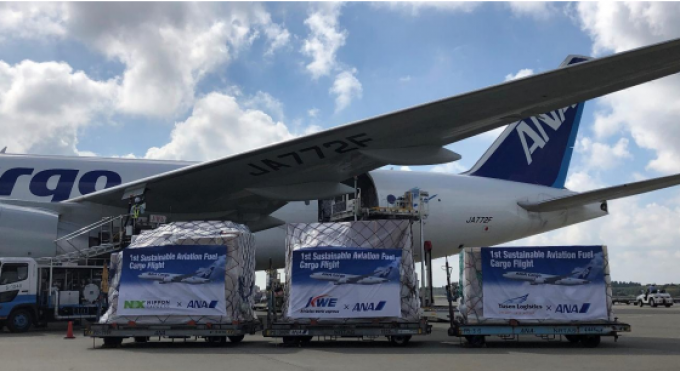 All Nippon Airways (ANA) Cargo has launched an initiative to use a sustainable aviation fuel (SAF) blend on selected flights, last month partnering with Nippon Express, Kintetsu World Express and Yusen Logistics for its first take-off.

The flight, from Narita to Frankfurt, used a very high blend, of 36.94% SAF, shipped from the Nordics to Japan.

“We added-in the emissions from shipping the fuel, which were negligible,” explained Sadami Sugimoto, VP cargo marketing & services for EMEA, at ANA.

“ANA is not able to secure SAF in sizeable amounts – and we also don’t have customers who are willing to pay for it all. It’s a balance.

“There are a variety of challenges in mass production, and airlines have been burning through cash, so there is a question of whether we are financially able to invest in SAF – but we can, with a customer.”

Customer Yusen Logistics, meanwhile, is talking with several carriers in a bid to cut emissions.

“Our customers are asking what initiatives we have, but it’s a mixed bag in terms of what they will spend,” explained Saskia van Pelt, Yusen’s air freight forwarding director, Europe. “Eventually we all have to take our part in the responsibility, and we need to get out of the chicken-and-egg situation [with the production of SAF].

“This is a first step in a collaboration – is it a workable solution? There are many initiatives in the market and we need to work on this with customers and carriers.

“This is a step in the right direction. Our customers are looking for any sustainability activity that we do.”

And Ms van Pelt said interest in sustainability was not limited to any particular customer sector.

“There will always be some companies that care more about it than others, although some may need to explain more about their responsibilities to their customers. But it’s becoming a board question now for many multinationals, and that will drive change.”

Mr Sugimoto added that SAF flights raised awareness, not just with the public, but to governments, authorities and regulators.

“At this stage, it’s about providing choices, but we also have to nudge people into buying it.”

While using a SAF blend is the current most common way to cut emissions from fuel, more innovations are in the pipeline. According to Sebastian Mikosz, IATA’s senior VP for environment and sustainability, SAF will contribute about 65% of the emissions reduction needed by 2050, when IATA has pledged the airlines will be net zero.

“Everyone wants to do it, as long as the airline pays the invoice,” said Mr Mikosz. “Our job will be to push ourselves, but also to be sure the burden is shared among partners.”

SAF production will need to rise from 100 million litres to 449 billion litres by 2050. ‘Greening’ land operations and infrastructure will contribute about 3% of the emissions reduction needed, while offsetting or carbon capture will account for about 19%.

The use of power-to-liquids, or electrofuels, is likely to rise too. The process sees synthetic aviation fuel produced using renewable energy to create hydrogen from water and, combined with CO2, preferably captured from the air, results in almost zero emissions.

“Power-to-liquids will be the next most probable solution, but it’s not a silver bullet,” said Mr Sugimoto. “We need about five or ten bullets.”