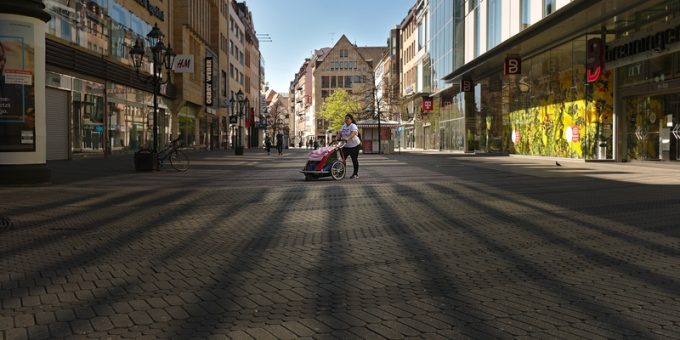 Lockdowns in Europe, forcing shops to close, have led to significant air freight cancellations as retailers re-think their supply chains.

One European retail forwarder told The Loadstar he had seen thousands of cubic metres-worth of bookings cancelled in the past 72 hours as the second UK lockdown came into force today.

Many retailers have switched to sea freight, or sea-air.

“I am talking huge volumes,” said the forwarder. “It’s a bit like March, when everything stopped and, quite literally, air freight was zero for some of the larger retailers.

“The difference this time is that we have a rough idea of the window – early December being the end point – so planning can still be done.

“But what was looking to be our best month ever, November has been somewhat dented and will be average at best.”

The news of cancelled shipments by air is supported by the latest data from Clive, which shows a sudden drop in demand for air freight in the last week of October. Demand dropped by 3% while there was a 1.5% fall in dynamic load factors.

“What we may be seeing is a fall in demand at the end of last month which coincides with government lockdown measures in some countries to curb the second wave of coronavirus,” said Niall van de Wouw, MD of Clive. 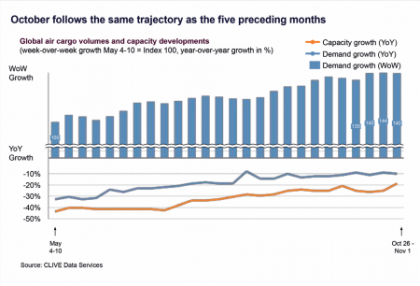 “While the dynamic load factor and airfreight rates for the month were higher, this was less built on demand and more on low supply, with the 26% annual decline in capacity. Perhaps the final week of October indicates that the peak might not be as strong as the industry had envisaged and hoped for.”

However, forwarders indicate that they expect December to be very strong as a result of the cancellations in November, buoyed in part by e-commerce.

“The air freight peak season has been deferred until December,” said one forwarder. “The late rush is anticipated to be at double its usual levels for reasons well known, including lockdown, of e-commerce products in the run-up to Christmas.”

He said he anticipated it being the busiest December on record.

Airlines are continuing to flex cargo capacity in accordance with demand, according to Robert Frei, business development director at TAC Index, which saw prices remain elevated at the end of October despite a fall in volumes.

“Airfreight prices for China/Hong Kong to the EU increased 9% week over week in the last week of October, and were 25% higher than in the final week of September,” he said.

“In absolute terms, rate levels were 60% up compared with the previous 2020 high in May. This is also true for China/Hong Kong-US traffic, where rates for the last week of October were up 28% over the same seven days of the previous month.

“Clearly, the industry will be monitoring the demand cycle very closely as we potentially enter another period of uncertainty.” 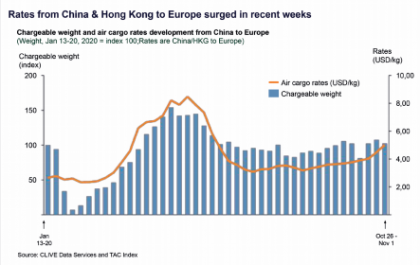