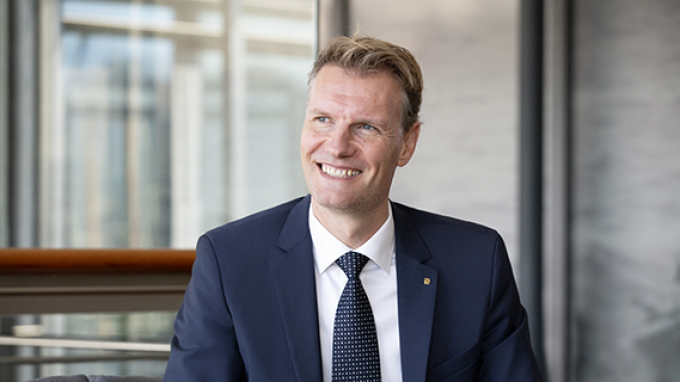 Carriers want a global decarbonisation system rather than regional regulations from jurisdictions in Asia, Europe and the US, said MSC CEO Soren Toft today.

As the EU climate policy comes under fire from the green lobby, he warned that the International Maritime Organization (IMO) would need to move faster to achieve its climate goals.

At the International Association of Ports and Harbors (IAPH) virtual event, also attended by Jacques Vandermeiren, CEO at the port of Antwerp, and IAPH secretary general Patrick Verhoeven, Mr Toft emphasised there was a need to “decarbonise the world,” and the industry must find the correct pathway to achieve its goals within the global decarbonisation project.

“We need collaboration to solve climate change, no one company can solve it on its own, which is why the shipping industry is looking within the World Shipping Council {WSC) framework to find a collaborative pathway for decarbonisation,” he explained.

Mr Toft also believes the IMO will move faster as a decarbonisation strategy evolves, pointing to the IMO’s climate strategy of a few years ago, which he said was not as ambitious as it was now.

“IMO is not a front runner and it will, of course, adopt new targets,” claimed Mr Toft.

However, the EU is expecting to set out its policy for regulating shipping that serves the EU, with documents leaked to NGO Transport & Environment (T&E) pointing to “locking in” fossil fuel use for decades, making the EU goal of decarbonisation by 2050 impossible to achieve.

The policy, which was not due for publication until 14 July.

“More than half (55%) of the energy used by ships calling at EU ports could be LNG and biofuels by 2035, according to T&E’s analysis of the proposal’s ‘climate’ targets. This is despite LNG offering minimal emissions reductions and, when burned, releasing methane, a global-warming gas up to 36 times more potent than CO2,” said T&E.

It added: “Most biofuels are worse for the climate than the fuels they replace, and those that do offer emissions savings are not available at scale.”

T&E shipping programme director Faig Abbasov argued: “This supposedly green fuel law would push the cheapest alternatives, which are also the most destructive. Counting fossil gas and biofuels as green will lock shipping into decades of further pollution, while we should be promoting renewable hydrogen and ammonia.

Further research into the development of low carbon fuels is required, said Mr Toft, clear that the cost should be no barrier.

“If $5bn [to fund the necessary R&D into new fuels] is not enough then we will go for $10bn, or more,” he said, also pointing out that, like car drivers, ship operators are “consumers of fuel not producers, and we need to look upstream to the producers to find the solutions”.

Mr Vandermeiren also emphasised the importance of port collaborations, but pointed out that ports were subject to the laws of the countries they are in, and with Belgium an EU member, Antwerp would be subject to Europe’s Green Deal.

“The sense of urgency will increase, but we do need collective action,” agreed Mr Vandemeiren, who added: “Some will move earlier than others but all will end at the same place.”

NGOs Oxfam, Deutsche Umwelthilfe and Transport & Environment are demonstrating outside the European Parliament in ...