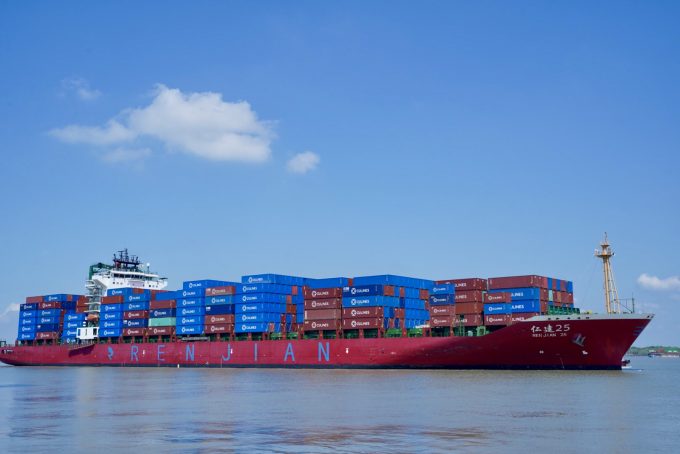 A silver lining has appeared for Asia-North Europe shippers desperate for more capacity.

The new AEX service, set to be the first on the route operated by a carrier independent of the three east-west alliances, will launch in early June, deploying four vessels of between 2,700 teu and 4,400 teu, according to Alphaliner.

CU Lines has completed four ad hoc sailings between China and Europe to cater for the upsurge in demand and decided to increase that to a liner schedule after chartering two additional vessels, including the 4,400 Ren Jian 17 (pictured above), which is due to make the first sailing out of Shanghai on 6 June.

According to the eeSea liner database, the new service will represent 2% of total box capacity between Asia and North Europe next month.

However, total capacity on the trade will see a decline from this month, according to eeSea – May totalled 1.164m teu, while June’s pro forma capacity currently stands at 1.074m teu.

Of that, the Ocean Alliance is the largest provider, offering 424,000 teu, followed by the 2M partners’ 30% market share and THE Alliance with 28%.

In addition, CU Lines said it had formed a joint-venture with Hamburg-based shipping agent Menzell & Dohle to deal with European customers.

Profits in the wake of faster containerships trump green concerns

Japanese carrier ONE has said its ships have raised their speed, increasing fuel consumption and ...

On the wires: Is the ship-ordering bonanza moving into dangerous waters?

Ordering new ships has been an activity heavily freighted with peril over the last decade ...

The FAA has finally extended the exemption which allows passenger aircraft to carry cargo in ...

Containership owners that have ships with expiring deals are having their heads turned by the ...