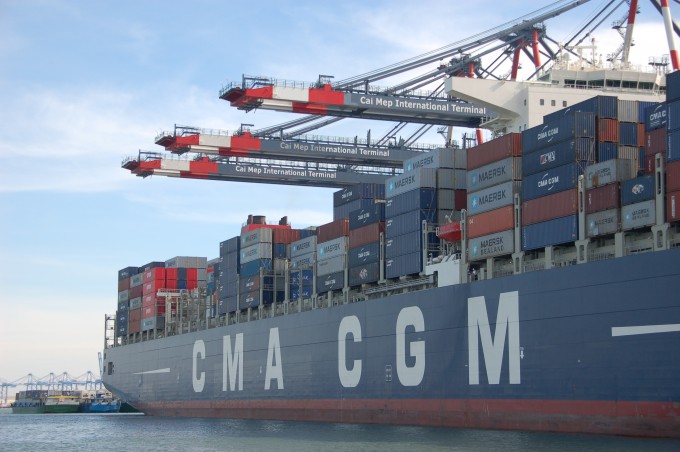 Newly-merged Chinese ocean carriers Cosco and CSCL, together with Evergreen, OOCL and CMA CGM are set to form a new east-west mega-alliance.

According to Alphaliner, the new grouping would challenge the market dominance of the Maersk and MSC 2M vessel-sharing agreement.

The plans, apparently discussed at high-level meetings last month, would “radically alter the currently liner shipping landscape”. Of the four east-west alliances, only the 2M (Maersk and MSC) would remain unchanged.

OOCL is a member of the G6; Evergreen and Cosco are part of the CKYHE; and CMA CGM and CSCL are members of the O3.

The 2M alliance operates over 2.1m teu of capacity on across the three main east-west trades, followed closely by the CKYHE offering of just over 2m teu, the G6’s 1.8m teu and the O3’s 1.5m teu.

CMA CGM has already stated its intention to pull APL out of the G6 alliance once it completes its acquisition from NOL in the second half of this year, and Alphaliner suggests that the financial distress of the two South Korean carriers, Hyundai and Hanjin Shipping in the CKYHE alliance, could be the catalyst for a new game of musical chairs in liner shipping alliances.

It said: “The potential insolvency of two Korean carriers and any potential restructuring arising from an (enforced) merger could undermine the service networks of the CKYHE and G6.”

The plan for the new grouping also appears to be a move by the stronger players to distance themselves from the rest and, at the same time, prevent the 2M partners from becoming totally dominant on some routes.

The “CCEO” (CMA CGM, Cosco, Evergreen and OOCL) would potentially be larger in capacity terms than the 2M, and Alphaliner said the move could leave UASC (O3); Hapag-Lloyd, NYK and MOL (G6); and K Line andYang Ming (CKYHE) without the necessary partners to enable them to offer a full range of services.

These carriers would then seem to have little option but to form a new alliance in order to compete.

“Various partnership scenarios are being contemplated and, given the prevailing uncertainties, the carriers are keeping all options open at this stage, “said Alphaliner.

However, with the ink barely dry on a previous round of alliance changes, ports and service providers are set to again face another period of uncertainty. And shippers face a similar set of unknowns regarding potential network changes and whether contracts with carriers would be honoured if capacity becomes tighter.

Meanwhile, it is understood that relationships have become strained between some alliance partners over the past six months, as financial results have deteriorated on many trades and pressure from shareholders to improve results has intensified.

One source told The Loadstar recently that the decision-making process in one particular alliance on the blanking of voyages last year had become “extremely heated”.