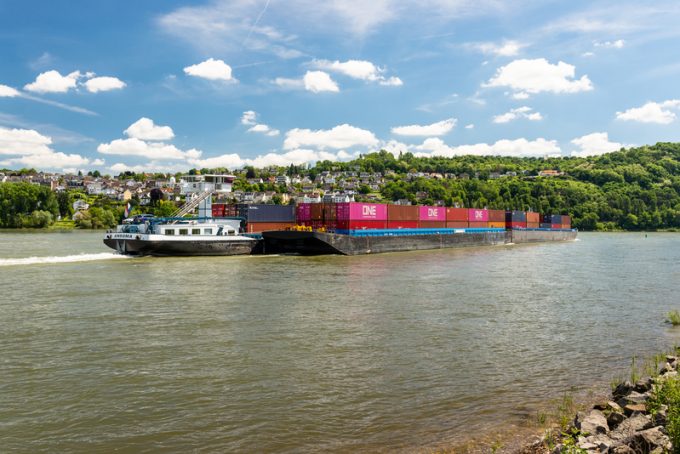 “Water level gauges on the Rhine are continuing to go down. In the next few days, a level below 80cm is forecast,” said Contargo. “From this, our barges – depending on type – can only transport around 27% of their capacity and our costs increase.

“Surcharges apply for full containers transported between the ports of Rotterdam/Antwerp and stations on the Rhine/Main above Koblenz.”

Further compounding shipper concerns, the barge operator noted that, should the Kaub gauge drop below the 80cm mark, “we no longer have an obligation to transport”.

But it added: “We will undertake everything possible to continue to transport booked containers. We ask your understanding for the fact that we shall no longer be able to meet deadlines with certainty. This is also clearly stated in our general terms and conditions.”

As alternatives, it pointed to rail connections at Contargo facilities to and from the seaports in which it operates, adding that it was aiming to increase capacities at these locations through additional services.

However, one source noted that rail services had yet to fully recover from heavy flooding in the region this year and claimed barge operators were failing their customers.

“The larger classes of container barge remain capable of handling relatively big volumes – depending on weights, they can manage about 50% of their usual capacity,” the source told The Loadstar. “The problem shippers are facing is that brokers are not willing to pay the charter rates to use these vessel types.”

As this story went to press, The Loadstar was unable to verify whether the water had dipped to a level that would see Contargo implement surcharges, but one source noted levels were “extremely low”.

Shippers using Northern Europe’s inland waterways have grown accustomed to delays, with congestion intensifying since the start of 2021. October matched a February record as cargo owners found themselves waiting for the better part of a week for deliveries, and while the current wait at Rotterdam is just shy of three days, the surcharge announcement has not been well received.

And, as if to underscore the challenges facing the sector, last Tuesday saw a 25km stretch of the Rhine closed after a near-miss between two vessels left both grounded, only reopening after a three-day dredging operation.

Congestion across Rotterdam’s inland waterways continues to worsen, amid claims that the situation “deteriorating” by ...