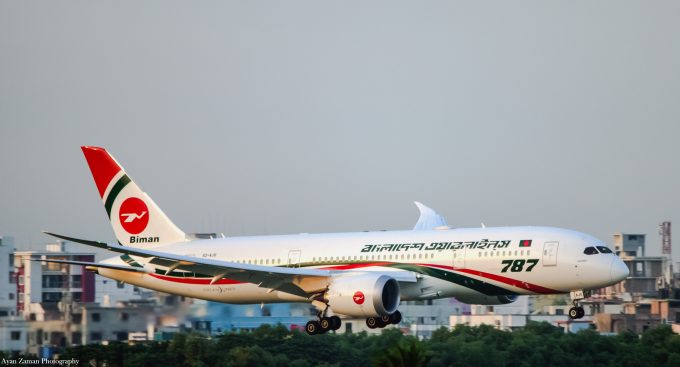 Biman Bangladesh could restart carrying fruit and vegetables to Europe after a three-year absence, under pressure from Bangladeshi exporters.

From the first week of January the carrier is deploying a 787-9 on the Dhaka-London-Manchester route, and the airline is holding talks with traders’ group the Bangladesh Fruits, Vegetables & Allied Products Exporters’ Association.

While the carrier does bring cargo into Europe, it does not currently carry perishables, which it mainly exports to the Middle East.

Cargo transported directly from Bangladesh was banned in 2016, following an EU ruling that it was a “high-risk” country for security. Instead, air cargo had to be screened in third-party countries before arrival in the EU.

While the suspension was withdrawn in 2018, Biman Bangladesh continued not to carry perishables into the EU.

But the carrier’s management has now submitted a work plan to Bangladesh’s civil aviation ministry on carrying vegetables and fruits to Europe.

It said the phytosanitary certification situation had improved, following the setting up of a modern vegetable processing warehouse and cold storage by the Ministry of Agriculture. Europe-bound farm cargo is sent to the airport in sealed vehicles after grading, processing and packing at the central packing house.

These steps have helped it comply with the EU standard, it said.

Foreign airlines must pay a penalty for any consignment which fails to meet EU standards and must be returned. Biman plans to follow the same process.

Chief executive of Biman Mokabbir Hossain told The Loadstar that, from January 5, Biman will operate seven flights a week to Manchester and Heathrow. Presently, a 777 is deployed to London.

“Biman has direct flights to London, but other airlines must transit in their respective countries. We want to send vegetables to London by Biman,” exporters’ association president SM Jahangir Hossain told The Loadstar.

He acknowledged that discussions were ongoing with the Bangladeshi authority.

Mr Hossain, however, added that although Biman would like to add perishables to its cargo, it was more focused on carrying garments, the country’s largest export.

Exporters’ association general secretary Mohammad Monsur told The Loadstar he had had meetings with Biman management on the issue, but progress was very slow.

“Presently there is no [problem] in meeting EU compliance, since export perishable goods go through a government-run process,” he said.

Mr Monsur added that there was a significant Bangladeshi population in both the UK and the rest of Europe, creating a huge demand for local fruit and vegetables.

“It will be highly beneficial if Biman starts carrying vegetables to Europe,” Mr Monsur said.