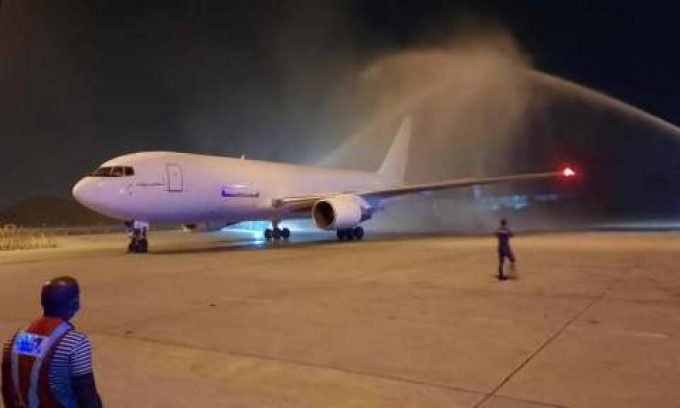 It’s a nice sentence to be able to say, and there is no doubt Quint Turner, CFO of ATSG, enjoyed the moment during an earnings call which could otherwise have been a touch disappointing.

And why is Amazon, avoider of taxes and unions, giving ATSG $132m as we speak?

It has decided to exercise the warrants it holds for 13.6m ATSG shares and, once the money is paid, Amazon will be ATSG’s largest shareholder, with14.4 million shares, some 19.5%.

Amazon is a major customer of the aircraft conversion and airline group; by the end of the year, ATSG will be flying 46 aircraft in Amazon’s network, up from 33 at the end of 2020 – including two of of the online retailer’s own aircraft.

Q1 this year saw ATSG lease four more 767-300Fs for Amazon and add another since the end of March.

ATSG CEO Rich Corrado said the schedule for its leased 767-300s was “aggressive”, with at least 16 on lease this year, of which 11 will go to Amazon, and another 10 next year. Other 767-300 customers include Amerijet, Air Canada and DHL.

Cargo is going well. Like Atlas Air, ATSG pointed to some changing trends in leasing. Mr Corrado said that, while many customers flew on behalf of express carriers, “there’s a few that have long-term plans for multiple aircraft over several years… and that’s something we haven’t seen before”.

He added: “In places like Mexico and Malaysia, we’re seeing multi-year demand for freighters to support the growth theyare seeing.

“The demand profile has changed over the past year, significantly … to where airlines are more comfortable ordering aircraft over multiple years as opposed to just giving us an order for one or two this year or next year. And that’s an unusual phenomenon for us.”

It wasn’t just Amazon’s vast wadge of cash – which has to be spent carefully following subsidiary Omni Air’s participation in the US Cares Act payroll support programme – that excited ATSG – there was also the recent news that the FAA had awarded a supplemental type certificate (STC) allowing ATSG’s joint-venture to convert A321s.

Mr Corrado said the news made the group “really happy” and that Pemco and 321 Precision were starting a conversion line.

“So we’ll make money on the kits and on the royalties, on the STC, and then Pemco will make money converting the airplane.”

The first customer is not an ATSG company, but, added Mr Corrado: “Our plan is to acquire A321s ourselves, convert them at Pemco and then lease them to the same types of customers that have been taking 767-300s.”

He noted that the A321 was a great replacement for 757-200s, much beloved by the integrators.

“We’re in the market now for A321s. We’re negotiating, in fact, for some right now, and we’ll see how that goes. Obviously, as we have approached the 767-300, we look to get a line of aircraft, a fleet segment we can have delivered to us over multiple years, and we’re going to continue to look for that.”

Lease rates, on a basic rule of thumb, would be about two-thirds that of the 767 – the same differential as conversion costs. And lease terms this year for aircraft have been just under 10-year terms.

While one analyst noted that “this is going to be another very good year for ATSG shareholders”, the one fly in the ointment was ATSG’s wet lease and passenger charter airline, Omni Air, bought for $845m in 2018.

It had a strong start to 2020, called on for repatriation efforts, but 2021 has not been so stellar. Revenue for ACMI services fell 13% year on year, in part due to less military flying and fewer passenger charters. ATSG said it had also retired four 757 freighters flown for DHL. Revenue for air cargo operations increased overall, however.

“In 2021, while our freighter leasing business continues to grow at a record pace, our airlines as a group did not achieve the revenues or margins they had in the early part of last year,” explained Mr Corrado.

However, ATSG did note it was starting to see a recovery in passenger operations, with Omni’s April numbers close to those in 2019. However, it added, the “cost profile is a little bit different”, as the airline flies to different airports and faces pandemic-related restrictions.

But the 3% fall in revenues did little to dampen spirits.

“Our strong confidence about the value we are creating at ATSG stems mainly from substantial long-term cash flows we get from leasing 767s, the most in-demand cargo aircraft in the market today,” said Mr Corrado.

“Faster fulfilment of e-commerce orders will require many more of those and other mid-sized freighters. That’s why customers are coming to us to make six- to 10-year commitments.

“Although our passenger operations are challenged by the pandemic over the short term, we very much like our market position and our long-term prospects.”

And of course, there’s that Amazon cheque for £132m. Not a bad day, overall.