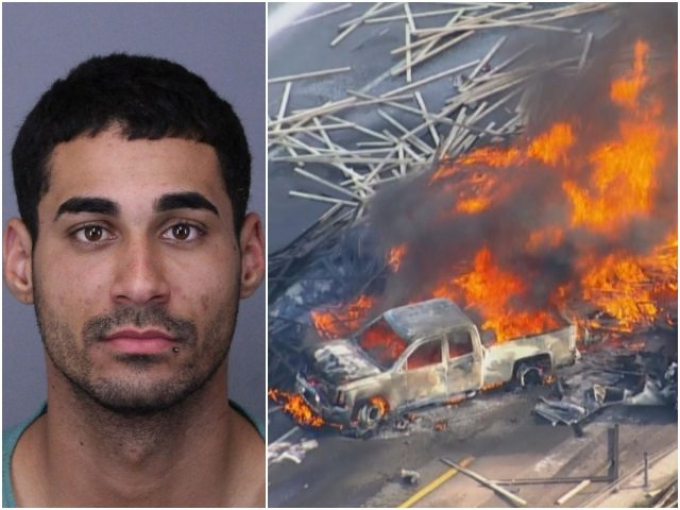 Rogel Aguilera-Mederos on the left and the scene of the accident in the immediate aftermath.
By Charlie Bartlett, technical correspondent
20/12/2021

Truck drivers have blocked the border of Colorado with parked vehicles – an apparent wildcat strike following the sentencing of their colleague Rogel Aguilera-Mederos, a 26-year-old Cuban immigrant, to 110 years in prison.

He was charged with four counts of vehicular homicide after his truck caused a 28-vehicle pile-up in April 2019 that caused the death four Colorado residents: Doyle Harrison, 61; William Bailey, 67; Miguel Angel Lamas Arrellano, 24; and Stan Politano, 69; and severely injured six others.

Over the weekend, viral footage apparently shows lines of trucks blocking highways into the state, and a petition in support of Mr Aguilera-Mederos has more than 4,300,000 signatures.

Supporters claim that the trucking company that employed Mr Aguilera-Mederos, identified by The New York Times as Houston-based Castellano 03 Trucking, should be in the dock as it had failed to maintain the truck.

In 2019, US-based publication Global Trade reported that Castellano 03 Trucking operated five trucks and had been cited by the Federal Motor Carrier Safety Administration for 30 safety violations during 19 inspections in the preceding two years.

In a statement to investigators at the time, he said he had been travelling at 85 mph downhill when the brakes failed and, although he tried to pull over onto the hard shoulder to avoid the cars, there was already a truck occupying the space.

His supporters argue that the trucking company, not Mr. Aguilera-Mederos, that should face legal action – either on the basis that a mechanical failure was allegedly likely due to company negligence, or in that the accident resulted from his lack of experience and poor training.

While these charges would not normally merit such a long sentence, the ruling was subject to state mandatory-minimum laws: “If I had the discretion, I would not run those sentences consecutively,” presiding Judge A Bruce Jones told news stations. “I accept and respect what the defendant has said about his lack of intent to hurt people, but he made a series of terrible decisions, reckless decisions.”

Despite the rise of trade conflicts and xenophobic populism around the planet, globalisation is not ...

NYT: Fiat Chrysler and PSA, maker of Peugeot, to merge

The New York Times writes: “Fiat Chrysler and PSA of France announced on Thursday that ...

Global trade has decelerated again, but only “perceptively”, according to the latest DHL Global Trade ...

This article is an abridged version of the one published last week on Loadstar Premium. Jeff ...