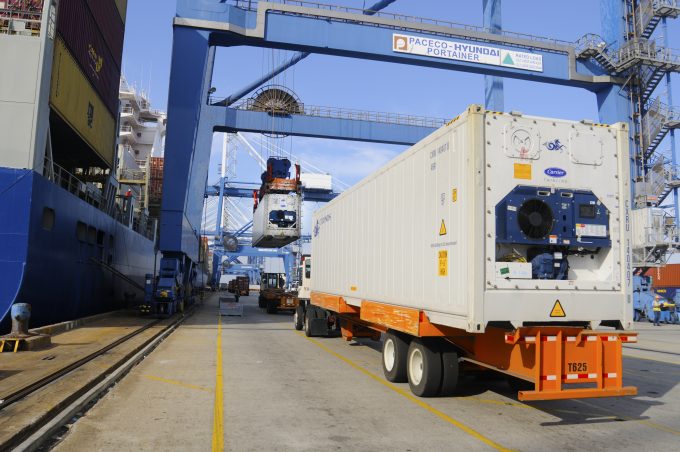 Investment in refrigerated goods handling facilities at US east coast ports is building up to almost frantic levels as those in the south Atlantic look to win market share from their northern competitors.

At Florida’s port of Tampa, work is under way on a 134,000sq ft cold storage on-dock facility, which will have over 9,000 pallet positions and 96 reefer container plugs, and is due to open next summer.

Also in 2017, a new cold storage building is slated to come on stream at the port of Manatee, on Florida’s western coast, after the port authority signed an agreement with Montreal-based stevedore Logistech, which will operate the 148,000sq ft facility. Each side shoulders half of the $17m price tag.

Manatee is a major import gateway for pineapples. The port currently has 207,000sq ft of refrigerated space, largely used by Del Monte Fresh Fruit. Logistech has indicated that it needs more room to bring in new customers with other types of fruit.

Manatee and Tampa Bay have both signed up for a pilot programme launched three years ago by the US Department of Agriculture (USDA) to test importing fruit and vegetables from Latin America into southern US ports. Historically this traffic has entered the eastern US through ports located further north to safeguard against fruit fly and other infestations.

Other US port authorities in the region have also embraced programme, and those that have signed up for the USDA pilot include Jaxport, Miami, Port Everglades and Savannah.

Near Savannah’s Garden City Terminal, PortFresh Logistics started construction of a 100,000sq ft cold treatment facility this year, primarily to target fresh produce imports from Latin America once it is open by year-end, according to the Georgia-based company.

The port of Houston is not involved in the USDA programme, but its management still sees a need for new cold storage capacity. It has embarked on the construction of a 300,000sq ft reefer facility adjacent to its Bayport container terminal, which will consist of several multi-user buildings and is scheduled to open next summer.

The port authority is targeting chilled and frozen meat, fish, poultry, fruits and vegetables. Speaking at the launch of the project, port commission chair Janiece Longoria described the development of the refrigerated cargo business as one of her key initiatives.

Several other reefer facilities at US east coast ports opened their doors this year. At the port of Charleston, Lineage Logistics brought a $150m cold storage warehouse on stream in spring. The 180,000sq ft facility pushed the port’s cold storage capacity above 600,000sq ft – in 2014, it was less than 120,000sq ft.

Since 2011, Charleston’s reefer traffic has grown 40%, and the State Port Authority (SPA), which manages the port, expects this to redouble in the coming years, confirmed president and chief executive Jim Newsome.

This summer, a 101,000sq ft site that can hold 10,500 pallets opened at the port of Wilmington, representing the first cold storage facility at the port.

It is targeting imports of seafood, fruit and vegetables into the Carolinas, but it is also there to boost exports of chicken, pork and turkey from regional producers. North Carolina’s agriculture exports climbed over 200% between 2005 and 2014 to reach $4.1bn in value that year.

Recently, the USDA upped its projections for US agriculture exports in fiscal 2017 by $6bn to $139bn.