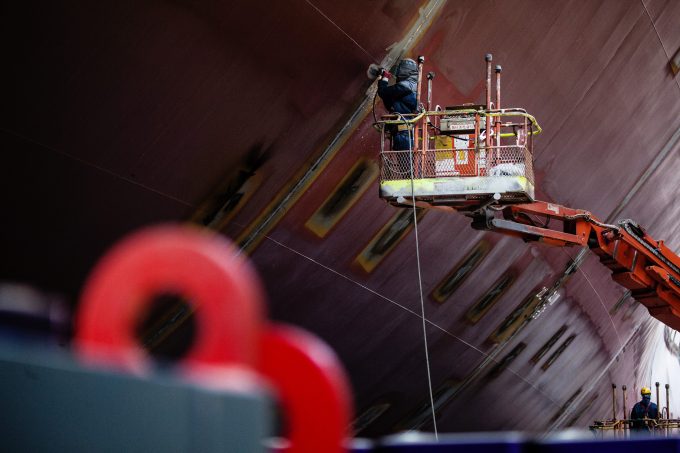 South Korean shipyards are in a battle with Chinese rivals, over construction of ultra-large container vessels, that they cannot win .

That was the general consensus among delegates attending the 11th annual World Ocean Forum conference in Busan last week.

The vessels are slated for delivery in 2019 and will overtake OOCL’s ULCVs of 21,413 teu as the largest containerships afloat, in terms of cellular capacity.

According to reports, the Chinese yards outbid HHI, offering to build the LNG-ready ships for $160m each – $15m below the best price offered by the South Korean yard.

Finance from the Chinese government and the French carrier’s desire to increase its influence in China were also said to be factors in choosing the yard.

Orders won by South Korean shipyards last year slumped to just $6.8bn, compared with some $20bn the year before.

Faced with chronic overcapacity, that went near to bankrupting the entire liner sector in 2016, carriers and non-operating owners have put a stop to ULCV orders in the past two years – CMA CGM the first to break that hiatus, followed by MSC.

South Korean media reports this month have suggested that 35,000 jobs in shipbuilding and related industries had gone within the first six months of this year. So the news that MSC had placed a $1.8bn order for 11 22,000 teu ULCVs – six with SHI and five with DSME – was met with jubilation.

However, during WOF last week, it was revealed that SHI had massively discounted its six vessels from the original agreed price of $164m to $138m. It was said by SHI that the reason was that MSC no longer required the ships to be dual-fuelled.

However, one shipyard executive told The Loadstar  last week the reduction of $26m “did not make sense”, and that “SHI is not going to save anywhere near that sort of money by cutting out the LNG option”.

He suggested it had more to do with pressure from the shipowner to cut the offer price and that SHI had released the statement to “save face”.

There has so far not been any news from DSME on price reduction.

French operator TOWT is becoming a shipowner and operator, with plans to grow a fleet ...

DB Schenker has appointed Vishal Sharma (above) as its new CEO of the Greater China ...