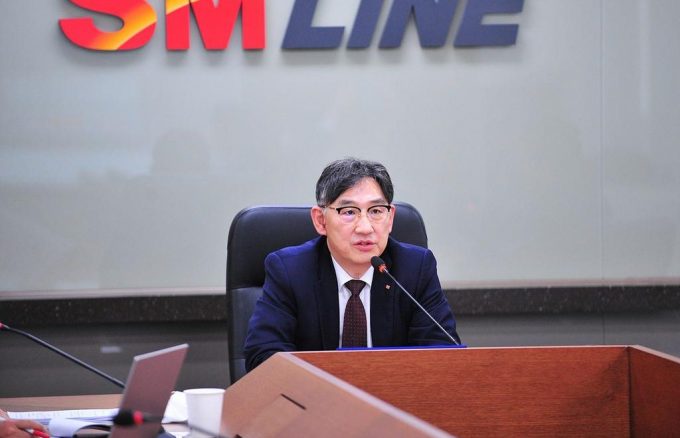 Flush with cash, South Korean liner operator SM Line has decided it would be more fruitful to invest its excess funds in its larger compatriot rival, HMM, than to leave the money in the bank to earn meagre interest.

Yesterday, SM Line CEO Park Kee-hoon said: “We recorded an operating profit of KRW1.82trn ($1.53bn) last year and more than KRW750bn ($581.85m) in the first half of this year, which is a situation where we have a lot of cash. The board decided to invest a certain part because even if we put the cash in the bank, the interest earned is less than 1%.”

He said: “HMM’s market capitalisation is over KRW12trn ($9.18bn) and the size of the convertible bonds held by KDB and KOBC is large. The size of SM Group’s assets is expected to be KRW18trn ($13.77bn) at the end of this year, which means that the group can only acquire one company.”

With the state having a substantial stake in HMM, Mr Park argued that it would not be easy to bid for HMM unless the SM group raised more funds, and even then, any potential bidder for HMM would have to be assessed by the government.

Mr Park is a former HMM employee, having joined South Korea’s flagship carrier in 1991 and heading its European operations before moving to SM Line, formed in 2016, after the group acquired the remaining portfolio of bankrupt Hanjin Shipping.

SM Line suspended its planned listing on the Korea Exchange in November and Mr Park explained that demand forecasts showed it was not easy to appraise the company’s value. However, the company will review the IPO by 2024.

Meanwhile, a spokesperson for HMM confirmed to The Loadstar that it was behind orders for three 1,800 teu boxships commissioned at Hyundai Mipo Dockyard this month. Costing some $107m, the ships are expected to be delivered by September 2024.

The spokesperson said the newbuilding order was in line with HMM CEO Kim Kyung-bae’s $11.3bn investment plan to expand the company’s fleet and other fixed assets.