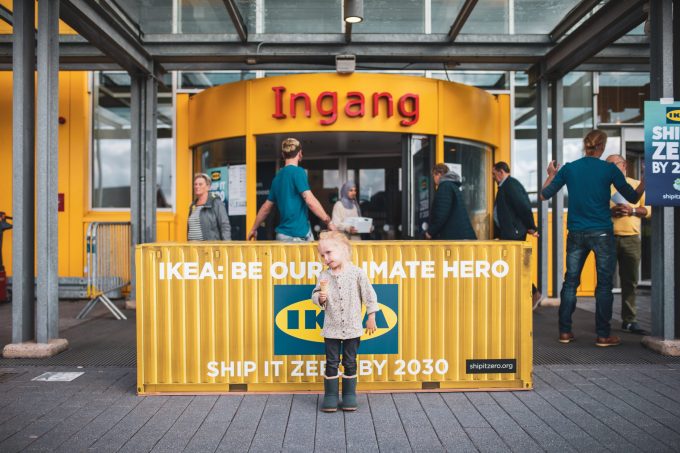 Climate activists delivered a 20,000 signature petition to the headquarters of furniture retailer IKEA in Delft, the Netherlands yesterday, calling on its management to raise their green credentials.

The Ship It Zero coalition, led by environmental organisations Pacific Environment and Stand.earth, staged ‘die-ins’ to highlight the 260,000 deaths said to be caused annually as a result of the use of fossil fuels in shipping.

In addition the group distributed flyers calling on IKEA to “abandon dirty ships” – according to Ship It Zero, IKEA and others, including Walmart, Target and Amazon, should abandon the use of polluting vessels by 2030.

“As one of the leading contributors to global greenhouse gas emissions, international maritime shipping must rapidly decarbonise if the world is to keep global warming at or under the 1.5 degrees celsius target that scientists say is needed to avoid the most catastrophic consequences of the climate crisis,” said a campaign statement.

In its latest green policy strategy, People & Planet Positive, IKEA said it was keen to “drive innovation” and “transform its business” with an “end-goal to support the Paris Agreement in becoming climate-positive by 2030 through the reduction of GHG-emissions while still expanding the company.”

Elisabeth Munck af Rosenschöld, head of sustainability, added: “Our long-term ambition is to reduce greenhouse gas emissions by 70% per shipment by 2030.”

However, the green activists believe this strategy is not consistent with meeting the Paris Agreement goals and that major companies such as IKEA must do much more to find a solution to the existential threat from the climate crisis.

According to IKEA, the group emitted 1.1m tonnes of greenhouse gases via its supply chains, excluding last-mile journeys, which are handled by franchises, the largestof which is Ingka Group, which has committed to a 100% shift to electric vehicles by 2025.

However, it believes: “Major cities like Amsterdam, Los Angeles, New York, Paris and Shanghai will achieve this by 2020,” adding that it reached its aim for 100% electric home delivery in Shanghai one year ahead of the 2020 target.

In an emailed statement, IKEA told The Loadstar: “Emissions from ocean shipping is an important topic for us at IKEA and we agree that it needs more focus. We are a big transport buyer, and we have a big responsibility to influence the ocean transport industry in a positive way.

“IKEA is committed to become climate positive by 2030, by reducing more greenhouse gas emissions than the IKEA value chain emits. We are committed to reduce the carbon footprint from all our transport with 70% by 2030 (compared to 2017).

“We do this by focusing on:

“For instance, in 2019 we were part of the first ever pilot to test biofuels in a deep-sea ocean container ship and we are now on a journey to scale it up.”

CNBC reports: – Walmart’s e-commerce chief Casey Carl is leaving the big-box retailer, according to a ...

DSV continues to work with liner operators and NVOCCs to overcome the shipping capacity shortage, ...

At Sauder Woodworking in Ohio, EDI accounts for the lion’s share of its electronic interaction ...