Ambitious Chinese express operator SF Express has pipped Alibaba and JD in the race to gain China’s first domestic drone operator licence – and it is set to collaborate with African drone specialist Astral in Kenya.

Company shares reportedly jumped 5%, with the State Post Bureau forecasting an extra 9bn parcels will be delivered in China this year.

The licence means the company can operate drones in pilot zones designated by the Chinese aviation authority.

“The legalisation of commercial drone operations is also a milestone in the era of smart logistics,” the firm added.

Drone use in Chinese logistics has been on the cards since 2015, after Alibaba conducted one-time trials and rival JD also reportedly piloting the technology.

To gain the licence, SF had to complete a four-stage process: preparation, initiation, implementation and validation.

“SF Express will use aviation drones to connect aviation logistics networks through our three-stage air transport network,”the operator said. “This consists of aircraft, large-scale drones and final-mile drones, which will allow us to achieve 36-hour access nationwide.”

Chief executive Sanjeev Gadhia told The Loadstar: “As a matter of coincidence, we are in talks with SF on collaboration, as we want to use its technology for parcel deliveries in Africa.

“It has expressed a willingness to participate in our test programme in Kenya with the cargo drone, and we wish to extend congratulations to SF on its new licence.

“We want to cooperate with SF as Africa will ultimately become the largest user of commercial drones once the regulations have been ratified.”

Astral’s drone division, Astral Aerial, will begin six months of drone test flights in Kenya. Mr Gadhia said this would be followed by tests of its award-winning Unmanned Traffic Management system, before a worldwide roll-out.

“We’ve partnered with other manufacturers to test their drones in Kenya and East Africa with vertical take-off and capacity of 1-250kg,” he added. “And we have founded an academy in Nairobi to provide basic and advanced training, which will be the region’s first accredited training academy for drones.”

While SF may have become China’s first company to be licensed, Germany-headquartered DHL has been trialling drones in Europe for five years.

A spokesperson declined to comment on SF’s licence but told The Loadstar the company was expecting to ramp up its own drone usage.

“We aim to conduct trials in an urban environment and our Parcelcopter [drone] trials are an important part of our mandate,” said the spokesperson. “As a logistics innovation, we are committed to meeting a wide range of customer needs by continually developing new products and services.”

SF cautioned that commercialisation of logistics drones was “dependent” on not only relevant laws being passed, but provision of supporting infrastructure. But it noted the licence meant it could begin expanding its drone network, adding it expected this to include remote areas inaccessible to traditional vehicles.

“We will expand the scope of logistics and distribution in non-populous, wading and remote areas that involve mountains and rivers,” the company said. “And aim to improve the timeliness of services, complete airspace coverage for third-tier cities and below and greatly increase logistics efficiency.”

There does remain some scepticism over the usefulness of drones, however.

Liam O’ Sullivan, director operations for International Post Corporation, said in Dallas this month: “I don’t believe drones have a role to play in the last mile, because of the sheer volumes involved. Senders may insist on a signature – you are not able to with a drone.

“But we do see some value in remote areas.”

In other drone news, the US Patent and Trademark Office has granted Amazon a patent for a drone which can be summoned by waving and shouting. You can read about it here. 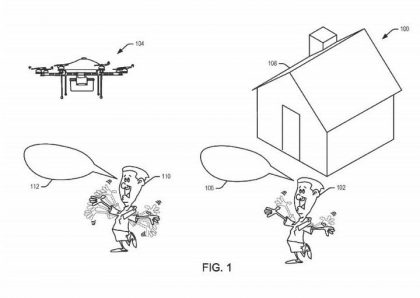