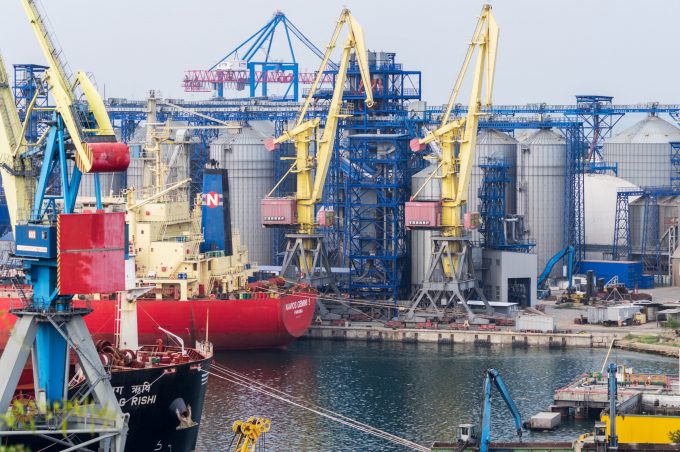 Increasingly complex supply chains have been made more complex by Russia’s invasion of Ukraine in February, which disrupted the country’s logistics industry and caused a ripple effect throughout regional container markets.

Ukrainian Black Sea and Azov Sea ports shut down shortly after the invasion, and Russian naval forces blocked Ukrainian facilities, threatening to attack any merchant (and non-merchant) vessels attempting to approach the terminals.

At least 16 merchant ships have been fired on since the beginning of the war, with two seafarers killed and many injured. Other vessels have been seized by Russian forces, mainly in the Mariupol, Berdyansk and Kherson regions, with crews taken off the ships.  Many hundreds of seafarers remain stranded on their ships in the war zone.

According to Ukrainian Sea Port Authorities (USPA), around 80 merchant vessels (container carriers, bulkers, ro-ro vessels) remain stranded inside Ukrainian waters, while thousands of containers and millions of tonnes of bulk cargo are blocked at terminals.

Effects of blockade
Informall BG estimates there were over 30,000 teu en route to Ukraine when Russia attacked. Shipping lines carrying Ukrainian freight suddenly no longer had access to Ukrainian ports and had to urgently rearrange schedules and loading plans.

Ocean carriers dealing with an extraordinary situation directed their boxships to the nearest seaport on the Black Sea – Constanta, in Romania. Naturally, the port was rapidly overloaded with transit containers destined for Ukraine.

A combination of the logistics challenges in Ukraine and shipping line restrictions on containers carrying Ukrainian imports caused major congestion at Constanta. Terminal operator DP World reported its facility at 98% capacity during March to May.

Seaports in Ukraine have been blockaded for almost five months, if they remain blocked to the end of the year, Constanta will have handled over 52,000 teu in Ukrainian transit cargo, with Ukraine facing an 85% container volume drop.

Many other containers en route to Ukraine were discharged at ports in Bulgaria, Turkey, Greece, Israel and other Mediterranean and North Sea hubs awaiting instructions from Ukrainian importers.

The changing cost
Costs relating to the delivery of ocean containers to Ukraine destinations have increased by at least 25%, compared with pre-war, 2021 data.

Already elevated freight costs (due to the Covid-19 crisis) have soared even higher as the war continues. Restuffing and additional operational procedures in non-Ukrainian ports became the new norm for Ukrainian importers and is driving costs up further. Long-distance trucking from foreign ports, along with increased fuel prices, are further contributing to already elevated shipping costs.

Since Ukrainian container terminals were cut off from liner services, the demand for export container shipments via alternative routes has been consistently growing. Import shipments, however, did not show much progress due to a combination of logistics challenges, such as shipping line restrictions along with truck and truck driver shortages.

Equipment imbalance
Many import containers have been, and some remain, stranded in Romanian, Bulgarian, Turkish and Greek ports as well as other container hubs on the Baltic and Mediterranean seas. Ukrainian importers are still struggling with arranging last-mile transport and getting through the paperwork.

Container equipment inventory in Ukraine is seriously unbalanced today, as Ukrainian shippers use up available export containers creating a deficit. Some lines present in Ukraine report they are experiencing a shortage of containers, particularly 20ft boxes, since May. Currently, the number of export container shipments from Ukraine disproportionately exceeds imports, which further contributes to container shortages. Unless shipping lines further relax restrictions, Ukrainian exporters are at risk of having no available containers by the end of 2022.

According to Informall BG estimations, liner service suspensions to Russian ports on the Black Sea by many carriers will cause a reduction of Russian regional container turnover of around 30%. This rather modest estimation is based on the fact that a considerable share of regional Russian trade still operates with those countries which currently do not support international sanctions.

In these circumstances, the total Black Sea regional container turnover will decrease by around 35%, resulting in slightly over 2m teu in regional volumes by the end of the year.

Maersk and MSC’s 2M Alliance will be hit the hardest, as it provides almost half of the regional container volume, according to 2021 Informall data.

At the same time, seaports of Romania, Bulgaria and Georgia are set to gain in container turnover volume this year. Informall analysis shows Constanta is expected to achieve a 10% throughput increase this year, mainly through Ukrainian freight transit and European import containers moving from Asia via the trans-Caspian corridor. Moreover, DP World in Constanta signed an agreement in June to invest into a new ro-ro terminal and logistics facility that will boost terminal capacity to handle project and general cargo on the Black Sea.

In addition, Georgia’s port of Poti is exploring plans to become a regional container hub for Asian exporters moving cargo on the trans-Caspian (or middle) corridor to EU countries, Turkey and Ukraine. At least three multimodal operators have launched a railway service via the trans-Caspian route since the beginning of the latest fighting.

As sanctions maintain the pressure on Russia’s logistics sector, we are witnessing tectonic shifts of seaborn and intermodal routes connecting South-east Asia and Europe. Rail freight traffic to and from Europe is moving away from transit options via Russia.

Some Chinese exporters have already stopped using Russia’s trans-Siberian railway route, which delivered Chinese products to the EU for many years.

EU sanctions against the major Russian state-owned railway company have also undermined its abilities to provide a reliable and seamless service for Chinese shippers, forcing them onto less consistent alternatives.